Fujifilm as announced the X-S10, a mid-range mirrorless APS-C camera with a 26.1-megapixel sensor, will be available from mid-November with an RRP of $1749 (body only). 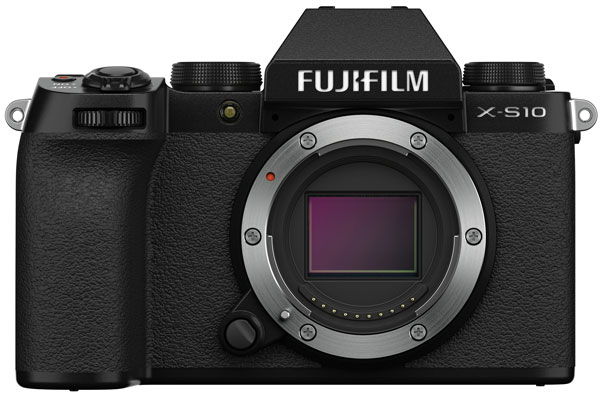 The camera features a X-Trans CMOS 4 sensor that include 2.16 million phase detection pixels, and combined with the X-Processor 4, the autofocus can accurately focus in as little as 0.02 seconds. Even at -7.0 EV (with an XF50mm f1.0 lens). Blackout-free high-speed burst shooting goes up to 8fps with the mechanical shutter, and 30fps with the electronic shutter. Oh, and the X-S10 comes equipped with Tracking AF and Face . Eye AF.

The X-S10 features up to 6 stops of five-axis in-body image stabilisation (IBIS), and also features a motion sensor retention mechanism to absorb shock and light vibrations caused by the shutter unit. The IBIS mechanism is 30 percent smaller in volume and weight than the Fujifilm X-T4, with the camera’s total weigh recorded at 450 grams.

The camera can shoot 4K/30p 4:2:0 8-bit video recorded onto an SD card. With a HDMI port, this can go up to 10-bit video. Slow motion footage can be recorded at Full-HD 240p, and camera shake is balanced thanks to Digital Image Stabilisation.

Unlike other mid-range mirrorless X series cameras, the X-S10 features an ergonomic magnesium-alloy grip, and the front and top place construction is also magnesium alloy. The LCD monitor can rotate up to 180 degrees, ‘making it useful not only for capturing selfies, but also for taking stills and videos from various angles’.

And lastly, what would a Fujifilm camera be without its ‘legendary’ Film Simulation modes? These nifty modes were ‘created to celebrate the history of photographic film by digitising some of the industry’s most iconic analog films’. There are 18 different simulations.