Fujifilm and Panasonic senior management have both flagged ambitions to make their premium cameras more affordable, while also providing an update on how the Coronavirus has affected the supply chain and demand.

While a range of topics are covered in both interviews, Inside Imaging has selected a few interesting points regarding the Panasonic L-mount and Fujifilm’s vision for medium format and XT models.

Panasonic
Yosuke (right) said Panasonic has achieved its goal of manufacturing the S1R for serious professional photographers, the S1H for videographers, and the more-affordable S1 for a wider audience of professionals and enthusiasts.

‘S1 is the one that sells the most in terms of quantity, because its price is affordable,’ he said. ‘However, S1H sales are higher than expected due to its significant appeal to the video and film industry. The S1R sells less than the S1, but allows us to mark our intentions for the industry, especially for professional photographers.’

Yosuke claimed Panasonic holds a 10 percent market share in the niche category of full-frame cameras that cost greater than €3000 ($5100+), which isn’t bad when considering the competition from Sony, Nikon and Canon.

Panasonic was also asked about the relevance of M43 in what’s essentially becoming a mirrorless full-frame world. Yosuke argues that while, yes, the mirrorless format performs better, the advantage to M43 is the more compact size and weight.

‘Regarding size, if a full-frame hybrid camera is smaller, combined with a lens, the total size remains large. On the other hand, the Micro 43 allows lenses and a whole much more compact than in full format,’ he said.

Yosuke also stated Panasonic only became fully recognised as a leading Japanese camera brand last year. Apparently, a brand has to win the ‘Camera Grand Prix’, an award presented each year by the Camera Journal Press Club of Japan at the CP+ trade show, to be recognised by fellow peers and competitors as a leading brand. So Panasonic has now joined the big boys.

‘Last year, we finally won the 2019 Camera Grand Prix with the S1R, which allowed Panasonic to be recognised as a leading camera brand thanks to the S1 series. I think we could send the message that Lumix is very serious in terms of camera development.’

The Lumix S1H has also been certified by Netflix for film production, an exclusive club that compromises of the likes of RED, Arri, Canon, Sony and others. What’s significant about Panasonic’s S1H approval is it’s the only stills-oriented camera body in the entire list – all others are cine cameras.

Lastly, Panasonic on Coronavirus. This information may now be outdated, as the interview was conducted in early March. However Yosuke airs concern regarding how the pandemic may affect demand, which in retrospect quite accurately foretells the current climate.

‘We have a production site in China, but near the eastern coast, towards Taiwan, so the damage is not as great as in other cities; 80 percent of the employees have already returned to the factory, but some suppliers still have difficulties. In these circumstances, we try to minimise the damage. Camera factories in China are starting to operate again right now. The majority of camera and lens production is in China – although we also have factories in Japan – so given the situation, we are trying to manage production right now.

‘My concern is not only with production, but also with the camera market itself. Few people go out and take pictures, it’s a pretty negative trend. If this kind of negative trend takes hold, the camera market will be sluggish. That is what concerns me and we have to stimulate the market as much as possible.  We hope the industry will be healthier than before and not be as dependent on the Chinese supply chain; I sincerely hope that many people are impatient to use their device to capture photos and videos as soon as possible.’ 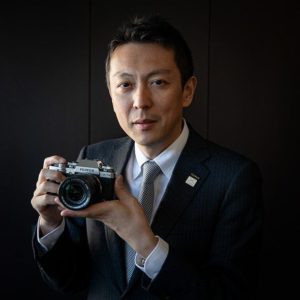 Fujifilm
Fujifilm is sticking to its two guns – APS-C sensor X series cameras, and medium format GFX cameras. The company as previously stated in 2018 it will ‘never go full-frame’, and this remains the case. Fujifilm has previously maintained its effort is to focus on medium format cameras, which it markets as ‘super full-frame’ in an attempt to gain wider appeal. (Would that then mean APS-C is not-so-super full-frame?)

Fujifilm’s goal was further bolstered in the Toshii (right) interview, with discussion about making the GFX a ‘mainstream product’ by being cheaper and smaller.

The X-T3 will stay on the market and become cheaper once the X-T4 is released. Given the X-T3 was released just 18 months ago, it won’t be phased out too quickly.

Also like a lot of Fujifilm products, the X-T4 is made in China and Toshii says to meet demand this is the best local to manufacture. There were concerns the Coronavirus would affect production, but everything appears to be on schedule. Additionally, the Coronavirus didn’t result in a noticeable drop in global cancellations of orders, but it seems unlikely Toshii would let that nugget of information slip out.

‘(There has been a) lack of laborers, lack of components (in the Chinese factories). So, I was actually told by the government first to extend the Chinese New Year holiday until the 10th of February. So, we had to extend the closure time. I was just really worried about it because at that point we were supposed to start some production for the XT-4, so, I was really worried about it in early February, but luckily enough our factories went back to normal as soon as the government allowed us to start things in February. So at the beginning, of course there were some restrictions, because of laborers and component shortage. But they quickly caught up. So at the moment I have no worries about the manufacturing side.

‘For the XT-4, we haven’t changed our plan. From the beginning we set up the production capacity of the XT-4 just in China Factory because we see there is such a big demand. In order to meet such a big demand I think that China is the best place to manufacture.’

Click here for the full article. It’s in French, so you’ll need to translate.