Does the Canon Powershot Zoom?

Well this is a little bit interesting: Canon has announced the Canon Powershot Zoom – a new format camera  best described as a spotting scope which shoots stills and video. 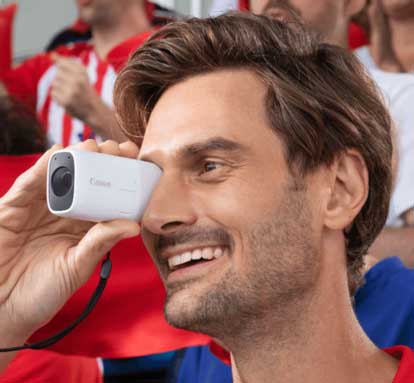 The Canon Powershot Zoom (currently available only in Japan) has optical zoom from 100mm – 400mm (35mm equivalent) which can be cropped down (‘digital zoom’) to 800mm. No, hang on! Some reports state that even though it’s called the Powershot Zoom, it seems that’s exactly what it doesn’t do – instead one toggles between 100mm and 400mm focal lengths. (Silly journalists assuming a camera with Zoom in its name actually performs that function.) To be confirmed either way, given Inside Imaging’s lack of Japanese language skills.

It has a 1/3-inch sensor (4.8×3.6mm) generally associated with smartphone cameras and weighs just 144g. Stills are at 12 megapixels while it shoots video at Full HD resolution (24fps). It uses Canon’s Digic 8 image processor.

Controls are limited to power, zoom, and menu buttons plus a photo/video switch.  Other features and specs of the camera include a maximum ISO of 3200, built-in optical image stabilization, Face AF, a microSDXC card slot, and a USB-C port. Images can be reviewed via the viewfinder or at a larger scale on a smartphone or tablet screen via an app.

Canon says the Powershot Zoom was ‘crowdfunded’ but more correctly it was announced via a Japanese crowdfunding site, with a goal of $280,000 worth of pre-orders. The indications are that it could be popular – the US$280K of orders were secured in a matter of hours. Interesting way of testing the waters for a new product.