News photos captured with a telephoto lens showing overcrowded beaches during Covid restrictions have been accused of being misleading, as lens compression distorts the distance between subjects.

Press photographers and photojournalists are expected to follow a strict code of ethics to ensure the scenes they capture is as close to representing reality as possible. While many photojournalists argue it’s impossible to capture ‘absolute truth’ and be completely objective, it’s still considered imperative to strive for balance.

This is why image manipulation through excessive post-processing, such as cloning out elements, is considered a cardinal sin by photojournalists, news agencies, and journalism institutions. But not all rules are clear and there are grey areas. Photojournalists choose the gear, settings, composition, and how to edit the photo, and these decisions can easily misrepresent reality.

As ‘social distancing’ became a legal requirement to curb the spread of Coronavirus, media outlets have jumped at the opportunity to publish pictures of the public flouting this new rule.

On August 30, the Sunday Herald Sun published a photo showing large crowds gathered at the beach in Ocean Grove, Victoria, during the Stage 3 Lockdown which prohibits leaving the house for anything other than shopping or exercise. 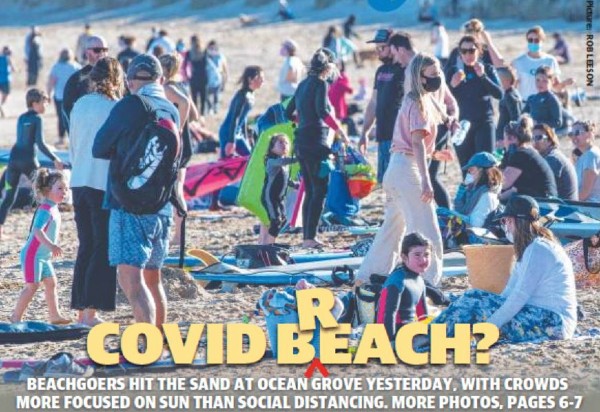 The photo was captured with a telephoto lens by press photographer Rob Leeson, who has 40 years experience working with major international and local news outlets. Leeson hasn’t responded to our request for comment.

Writer and photographer, Sarah Walker, happened to be on the beach when Leeson captured the image. This is what she had to say about the incident on Twitter:

‘I saw the photographer who shot these images. Hard to miss a man carrying a monopod and a lens the size of a toddler. The greater the zoom on a lens, the more it compresses the space. Old mate’s lens went to at least 400mm. Practically, that means the lens natively compresses the distance between objects. By shooting down the beach, it makes the people look very, very close together.
Ocean Grove was packed yesterday. But for the most part, people were doing a very impressive job of keeping socially distanced. The police were there keeping an eye on things.
This is what the beach actually looked like at the exact time that press photographer was taking those images. Busy, but not nearly so frightening. Shots like the one in the Herald Sun don’t happen by accident. Nobody goes out shooting with a lens that big unless their photo editor has specifically asked for a shot designed to rile people up. People say the camera doesn’t lie. It’s not true.’

Back in March, when Covid and social distancing were fresh, photos also emerged of Bondi Beach in Sydney with an ‘unacceptable’ number of people enjoying the warm start of Autumn. While numerous photos with different focal lengths were circulated showing an alarming number of people at Bondi, tabloid media published photos captured with a telephoto lens.  The Waverley Council’s decision to close numerous Sydney beaches was likely influenced by the articles and photos.

More photos have since emerged of crowded Bondi, but the Council has become more wary of misleading images.

‘There have been some photos in some publications that have shown people weren’t social distancing, but when we checked, they were. So it’s just a matter of the angle of the photo that was taken,’ Paula Masselos, the mayor of Waverley Council, recently said to The Guardian. ‘I’m hoping that the photographs that are taken will accurately represent the reality on the ground.’

In May a crowded Californian beach photo shot with a 380mm focal length went viral, and also contributed to temporary beach closures. The OC Register, which published the photo, was accused of ‘journalistic impropriety’ and defended the photo by stating the long lens was used to ‘get as much of the beach… to accurately depict the scene.