A US photographer has been left ‘devastated’ after a photo of ballet dancers she uploaded to Unsplash, a free stock photo agency, was used in a UK government advertising campaign about retraining into a new career.

Unsplash is a free image library consisting of over two million files, ‘brought to you by the world’s most generous community of photographers’. Unsplash images come with a ‘ very, very broad copyright license’, covering commercial usage. There really isn’t much incentive for a photographer to upload images to Unsplash, other than momentary hits of dopamine as notifications highlight how many times an image is downloaded. And while Unsplash gushes about how the exposure may lead to real paid work, no case studies prove Unsplash is a pathway to a career in photography. It’s fair to say the consensus is the platform devalues stock photography by offering images for free.

Another major concern regarding the Unsplash licence is it doesn’t cover the rights to use ‘people’s images if they are recognisable in photos’. However, unlike other stock agencies, it’s not a requirement to include model releases or other legal documentation when uploading images to Unsplash. The Unsplash terms state ‘if you download photos with any of these (people/trademarks/works of art) depicted in them, you may need the permission of the… (pictured) individual depending on how you use the Photo.’

In 2018 YouTube photography vlogger, Zack Arias, highlighted how US photographers should always obtain a model release for commercial photos, however his small survey of Unsplash users found none had one.

‘Let me make this as clear as possible. If a photograph is used in a commercial sense, and it is not model released, the photographer is liable. You can be taken to court, and sued. It’s that simple. While someone (a model) might tell you it’s fine to use their picture, they might have an axe to grind with you later, or have their picture used in some way they do not want it used,’ he said. Read more here.

And that is exactly what’s happened!

Atlanta photographer, Krys Alex, uploaded images to Unsplash she captured for a local dance studio, Vibez In Motion, featuring a young dancer, Desire’e, and the owner of the studio, Tash Williams. 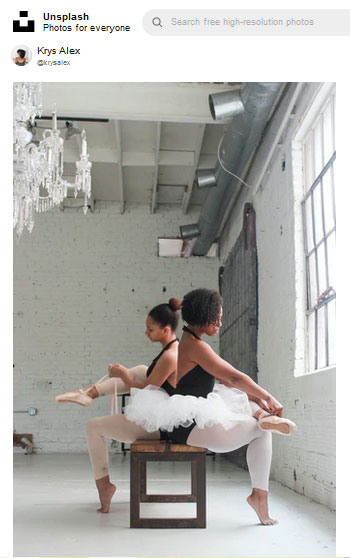 The photo then appeared cropped in an advertisement for CyberFirst, a UK government-backed campaign to help develop ‘the UK’s next generation of cyber professionals through our student bursaries’. The image shows Desire’e, who has been renamed Fatima in the ad, and states her ‘next job could be in cyber. (she just doesn’t know it yet)’

The Covid-19 pandemic has thrashed the UK’s creative industries, and many feel the government hasn’t done enough to offer financial support or assistance. It’s such a dire situation for UK photographers right now that 14 leading professional photographic trade associations have formed a coalition to lobby the government for more support.

So with creatives already feeling left out of government support packages, the ‘patronising’ advertisement hit a nerve and went viral on the Twittersphere. The UK government distanced itself from the ad, with culture secretary Oliver Dowden calling the advert ‘crass’, insisting it didn’t come from his department.

‘This was part of a campaign encouraging people from all walks of life to think about career in cyber-security, but this piece of content was not appropriate and has been removed,’ a UK government spokesperson said. The ad was quickly pulled, but continues to live online.

After the advertisement became infamous, it found its way back to Atlanta, Georgia, and Alex appeared in a video to explain ‘#whoisFatima’.

‘I was shocked. I woke up Monday morning to a bunch of emails and tags, and I really felt devastated,’ she said. ‘I immediately thought of Desire’e and how her face was just plastered all over social media and the internet, different news articles, and memes were created, and she had no clue. All of that really hurt me.

‘Some people questioned if I knew, and if I approved the use of my work. If I had known it was going to be used the way it was, I would have never agreed to it.’

Of course, the moment the image was uploaded to Unsplash, Alex forfeited the ability to negotiate how the image may be used. Even though the photo has been deleted from the platform, ‘legally, once a photo has been released under The Unsplash License it remain free-to-use, even if removed’.

The UK government’s National Cyber Security Centre should have probably allocated a budget for licensing a photo, and using an image showing an individual without a model release should also have been a big red flag. But surely uploading the image to the platform, with absolutely no incentive to do so, is also a mistake. It’s also unclear if the subjects consented to having their image available on Unsplash.

Alex states in the video that she and Vibez In Motion are ‘exploring their options’ and consulting with different professionals about the best way to protect rights in this situation. Alex didn’t respond to Inside Imaging‘s request for comment regarding uploading the image to Unsplash.