First impression reviews for the Canon EOS R5 and R6 full-frame mirrorless cameras are trickling in, and so far the verdict is mostly positive. On the stills side, reviewers say the pro-oriented R5 is Canon’s finest camera, with incredibly fast and accurate autofocus that’s superior to Sony; however both the R5 and R6 are not ideal tools for serious videographers due to overheating issues. 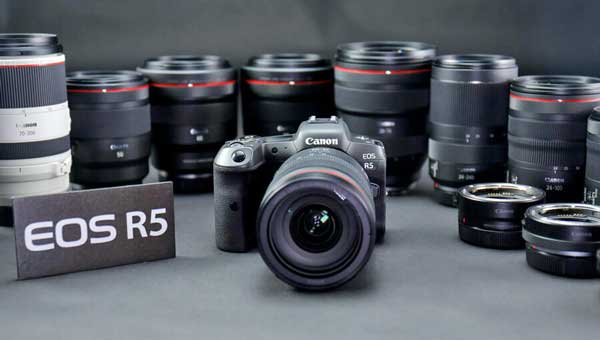 The R5 and R6 both shoot 12 fps; have the same Dual Pixel CMOS AF II system, and people and animal AF tracking; and up to 8 stops of image stabilisation.

Digital Trends – Daven Mathies on the R5
Daven Mathies has written the best in-depth ‘first look’ review of the R5 we came across for Digital Trends. He began by describing the R5 as ‘not… exactly what we were sold’, but ‘still an excellent camera’.

Mathies is talking about Canon’s error in marketing the camera’s video features first-and-foremost, without highlighting its outstanding stills performance. ‘This shifted people’s expectations of what the R5 would be, and I can’t help but feel this was the wrong way to hype it,’ he wrote.

‘If the R5 had originally been marketed as a still camera, I think the many complaints we’re now hearing about overheating in video mode wouldn’t have been so loud. But because Canon emphasised video so strongly in the lead-up, reviewers are feeling a little underwhelmed that the reality doesn’t match the promise’.

Regarding AF, he was ‘blown away with how quickly the R5 would find the subject within the frame as well as how strongly it stayed glued to it’. He speculates Canon’s face detection may even be better than Sony’s leading-edge technology.

‘But what really impressed me was the animal AF. When shooting birds in flight, the focus box instantly jumped to the bird’s head — not just the bird, but actually its head,’ he wrote.

Mathies goes on to discuss his video shooting experience, along with explaining in layman’s terms the camera’s video capabilities in relation to the sensor. Regarding 8K, he states that ordinary folk are unlikely to use it, and professional filmmakers will find the overheating unacceptable. We won’t pinch too much of Mathies’ quality work, read more here.

‘We were expecting to be impressed, but we weren’t prepared to be gobsmacked. The Animal AF is so good, and so accurate, that it is actually unfair. Wildlife photographers have spent years wrestling with twitchy autofocus, learning how to perfect their timing, sucking their teeth at all the shots that were focused on the feet or the tail or the wing instead of the eyes.’

Artaius mentions the 4K and 8K overheating as a ‘very public sore point’ for the Canon R5, whereas the AF is top notch and has proudly dethroned Sony. Take that, Sony! Take a chill pill, James!

DPReview – Carey Rose on the R5
Rose’s initial review compared the R5 with Canon’s previous mirrorless full-frame offerings, the R and Rp, which are described as not ‘especially speedy or groundbreaking. They simply didn’t come off as terribly ambitious. The EOS R5 does.’

The camera is, according to Rose, a ‘true mirrorless 5D’ thanks to traditional ergonomics, AF system, speed, durability, etc.

‘And whatever kind of hypothetical 5D user you might be – whether you shoot weddings, sports, video, portraits, you-name-it – the EOS R5 represents a step forwards, even if you don’t plan to touch some of the headline features like 8K recording.’

This review published by DPReview feels slightly held back and doesn’t quite sink its teeth deep into the R5 and R6. Read it here.

Cinema5D – Johnnie Behiri on the R6
Brace yourselves for this one. Behiri reviewed the R6 from a videographer’s perspective, and after a disastrous experience with overheating when shooting a short documentary, he apologised to his subjects. ‘Nothing has prepared me for the encounter I was about to have with the Canon R6’. Read here or watch below.

But before the big con, the pros. IBIS works ‘remarkably’, and the Dual Pixel Auto Focus function is ‘one of the best (if not the best) currently in the market’.

Right. Now onto the criticism, primarily aimed at overheating. ‘…If you thought that the overheating issue is bad, think twice. It is certainly worse than what you can imagine!’

Here’s a few choice quotes: ‘Recording time limitations is one thing but overheating shutdown in unexpected points of the filming day is truly an obstacle. Furthermore, the recovery time is long (or at least seems to be long when you are under pressure to resume filming as your talents are all waiting). As my frustration grew, I tried it all. Ice bag on the camera, strong fan pointing directly to the sensor glass (yes, at some point I did not care anymore about exposing the sensor to the strong wind as long as I can resume filming)

‘Frustrated as hell, I had to apologise to Mari Fujii-san and Neal. Some of the best images I was supposed to capture that day were missed. Other actions had to be repeated and if it was not enough, at some point I had the “genius idea” of lowering the resolution to Full HD and continue shooting, just not to waste their time. This method worked to some extent, but not all the time.’

– So whomever at AP decided to switch from Canon to Sony sounds like they might have made the right move when it comes to video shooting, but maybe not so much for the autofocus speed and sophistication so valued in stills photojournalism.