The unseemly saga of the Canon EOS R5 ‘launch’ continues to deliver plenty of thrills and spills, with Sydney-based online camera retailer Camera Warehouse creating something of an international incident by posting a pre-order price of $10,499 for the camera. 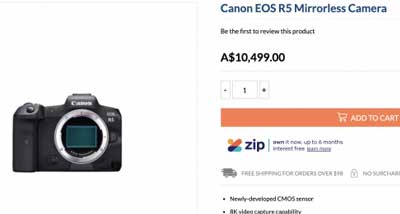 The posting with the $10,499 price emerged late last week and by Thursday it was being reported on a range of ‘usual suspect’ websites. The pricing has now been taken down and replaced by a $200 refundable holding deposit. Sorry, ‘A HOLDING DEPOSIT THAT’S FULLY REFUNDABLE. IT’S NOT THE FULL PRICE…’

The $10,499 price has since been rebutted by…wait for it…the Canon Rumors website, while Canon the actual camera company has made no comment. Canon Rumors rather sniffily advises readers not to believe all the rumours they read on the internet.

‘I highly doubt anyone is going to know this information until the week of the official announcement,’ wrote whomever the dude who publishes Canon Rumors is: ‘There are only two sites I’d trust with pricing before the official announcement, Nokishita who usually gets Yen pricing and well, this site.’ (Japanese website Nokeshita appears to be the go-to website when Canon or its PR minions want to leak product information.)

The more forgiving types are prepared to regard the whole thing as an unfortunate snafu – the web person at Camera Warehouse putting the price up as a ‘placeholder’ and then accidentally sending it live. The hardened cynics are seeing it as clickbait cooked up by an online marketing genius. The flaw in the nice people’s argument is that $10,499 is a pretty specific figure. $????.?? or the like would be less perilous.

And it’s worth noting that Camera Warehouse seems to have some pretty sophisticated people looking after its website. Back in 2017 we reported that a range of camera retailers across the country were having conniptions because Camera Warehouse was using ‘doorway pages’ to attract customers to its website – web pages designed specifically to give the impression the Sydney retailer had a physical presence in, say, Coffs Harbour or Newcastle. (‘Google says No’.)

The story has provoked a lot of reader feedback discussion on websites like Petapixel as to whether the price is too high. Whatever the case, it’s either accidentally or deliberately provided some great market research insights to Canon on what potential purchasers might be willing to pay. And now that a high bar has been set, anything lower – even if it’s higher than initially hoped for – will be better received. Could it be that Canon is freaking out about being able to ask enough for the R5 to make it profitable? That breakthrough 8K capability must have cost a lot to develop…

Interestingly, another price point emerged in the brouhaha which followed the leak/error. A reader of website Newshooter.com – ‘a site for working professionals in the TV & Film industry’ supplied the site editor, Aussie cinematographer Matthew Allard, with a written quote from well-known Sydney camera retailer Georges. The Canon EOS R5 was quoted as $5800, including GST.  See below: