The AIPP National Board made a raft of announcements over the Christmas period, including a new membership system and drop in fees, the APPAs scheduled to run at Aperture, and updates regarding the board.

The announcements come off the back of a dramatic

end of year for the AIPP, with an unexpected leadership shake up followed by three board resignations.

Following the resignations, there appears to have been confusion regarding the AIPP board’s compliance relating to the ‘pertinent issue surrounding Director Bruce Pottinger’.

The AIPP Constitution requires a minimum of five elected board members, also known as ‘full director(s)’, to serve on the National Board. While Louise Bagger, David Simmonds, Geoff Comfort, and Ben Kopilow were elected, Bruce Pottinger was co-opted back in April 2018.

With only four elected board members, there was a perception by some that the AIPP was not compliant with its constitutional obligations, further regulated by The Corporations Act. However, when the AIPP adopted a new constitution at the 2018 AGM, Bruce assumed the role of  ‘full director’.

The AIPP has co-opted another board member, Les Morrison, who is a Mornington Peninsula-based photographer and AIPP member since 2014. Ben Kopilow has taken on the role of treasurer, following Sara McKenna’s resignation. 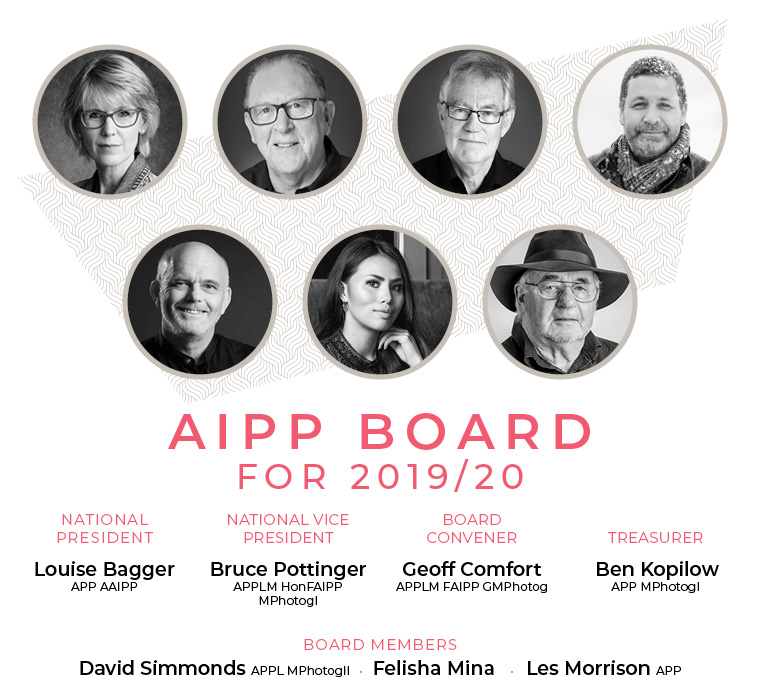 Aperture Australia, held at the Melbourne Convention Exhibition Centre, is a two-day event consisting of TedX-style presentations from photographers, along with workshops and a trade show. The inaugural event was a success in 2018, and Aperture claims to be the biggest event of its kind in the Southern Hemisphere.

‘This is the first time in a long time the industry will come together like this. It’s a huge deal,’ said Glen McKimmin, Aperture Australia director. ‘The merging of two highly respected industry giants on the same weekend is a massive step in the right direction. Together we’re making photography accessible to everyone who is interested.’

New membership, lower costs
AIPP Accredited Members (APP) have had their annual fees reduced from $550 to $468, with members who paid up in full across November and December set to be reimbursed the difference.

A Member has access to all the AIPP resources and special offers.