Unsplash ‘Licence’ – what a joke!

British photographer, Simon Palmer, is warning others to be careful when using free stock photo website, Unsplash, after he was cornered into paying a licensing fee for publishing a purportedly free image.

Unsplash describes itself as having over one million ‘free (do whatever you want) high-resolution photos brought to you by the world’s most generous community of photographers’. Photographers contribute by uploading high-res images, which are available for a free download with a licence covering commercial usages. The contributing photographer’s incentive comes in the form of positive validation, as they are informed how many times an image is viewed and downloaded.

Simon, like many small business operators, published Unsplash images in blog posts on his non-photographic business website. It emerged that the copyright owner of one of the Unsplash images hadn’t authorised it to be uploaded to the platform, and the owner hired the attack dogs at Copytrack, a copyright detection and enforcement agency, to demand payment from Simon.

One of many issues with Unsplash is it doesn’t have a stringent vetting system to determine the credibility of contributing photographers. It’s remarkably easy to upload and download images via the platform, and there are no receipts or proof of licensing. While it’s unclear why a rogue operator would upload an image which is not their own, it does happen, making Unsplash a potential starting point for unwarranted copyright disputes.

‘…It troubles me that Unsplash continue to operate with a clear loophole in their basic business model.’ Simon told Inside Imaging. ‘I could put an image up on Unsplash using a fake name and a burnable email address, leave it there for a few months and monitor its use. Then [I could] pull it [down], place it with Copytrack or another webcrawling copyright system, and leave it to the Copytrack system to find it and start the automated process of catching people out.’

The Unsplash Licence
Unsplash, of course, denies any liability the moment a user violate its terms of service, which covers illegal activity like image copyright infringement. Yet it claims to have no responsibility over monitoring what’s uploaded.

On the other hand, contributing photographers also authorise Unsplash to ‘enforce any violations of the sublicenses we grant in the Photos to others. In other words… authorise us to enforce your copyrights in the Photos on your behalf.’

There is just one condition to the Unsplash Licence that would make the platform enforce copyright – it ‘does not include the right to compile photos from Unsplash to replicate a similar or competing service’.

In other words, Unsplash won’t allow someone to download images to create another free photo library service; or sell photos through a stock agency like Shutterstock or Adobe Stock. Bali-based professional photographer, Dominik Vanyi, published an article after using Unsplash for two years to see if the exposure would lead to paid work. Surprise, surprise, it didn’t – despite over 120,000 image downloads – but he did discover one of his images cropped and available for sale on Adobe Stock. Unsplash told Dominik they’d request Adobe Stock remove the image. 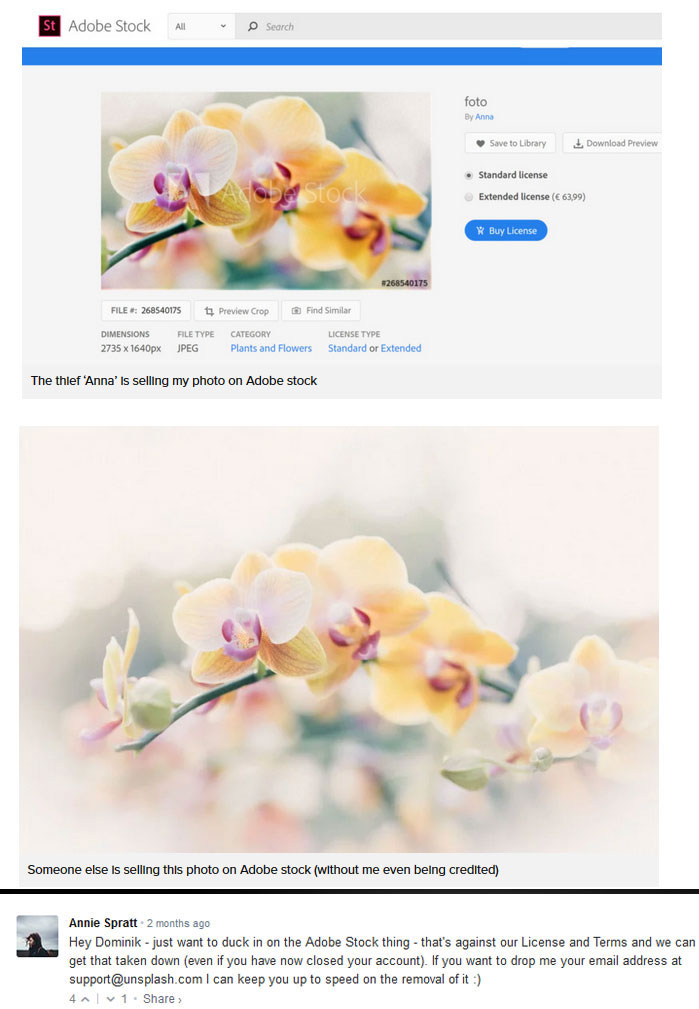 The Unsplash business model relies on revenue generated from online advertisement, but more recently it has entered into partnerships with software companies to have its library integrated into web and graphic design apps. So it appears that only Unsplash is allowed to make money off its contributors content. Seems fair.

Back to Simon
After Copytrack demanded payment on behalf of a photographer, Simon found the offending image  had disappeared from Unsplash.

Despite having evidence to support his claim, Copytrack insisted the Unsplash Licence was invalid as the copyright holder didn’t permit the upload.

As Simon was the ‘end user’, Copytrack said he was liable to pay the fee. It seems more likely Simon was viewed as low hanging fruit and easier to pursue for a fee than Unsplash, which claims to have no liability in an event such as this. Additionally, Unsplash is probably armed with a fleet of lawyers ready to battle it out.

In an e-mail to Copytrack, Simon said he ‘acted in good faith’ by using the free image platform. He made an effort to not commit copyright infringement, and felt Unsplash should hold a degree of liability for hosting the offending image.

Copytrack, which strong arms alleged infringers with threats of legal action, kept its attention on Simon and in the end he reluctantly paid the fee.

‘Quite a few other companies have used the [offending Unsplash] image, one of which was a legal organisation,’ he said. ‘Unsplash have remained non-communicative since I ended up paying the fee, and I no longer use their system for images. I have emailed them on countless occasions with no further response.’

Simon was disappointed that Unsplash made no effort to assist him, or help track down the source of the fraudulent image.

‘Unsplash can hold up their hands and say that they ask the photographer to declare its their own image and that they own the copyright [by agreeing to T&Cs when they sign up]. But with no tracing and knowing you can fake an IP address as well, it means that they couldn’t track it even if they wanted to, which they clearly couldn’t care less about…’

Unsplash has been recently integrated into PicMonkey, a cloud-based image editing and design platform, as well as a Mac web design app, RapidWeaver.

‘In some respects, they offer a small hope for budding quality photographers of getting their work out there, with the distant carrot of business as a result of people seeing and using the free images,’ Simon said. ‘It’s the 21st century version of someone saying “I’ll give you a photographers credit in the byline if you let us have your photographs for free”. In a market where photography has been commoditised to where anyone with a camera phone thinks they can created stunning images, Unsplash makes it even harder for working photographers to make ends meet, and put food on the table.’

Check out Simon’s photography and conservation work at Cheetah World.