Sony ANZ is calling out for more ‘alpha’ photographers to join Sony Scene, a casual ambassador program designed to promote Sony-endorsed events, such as workshops and presentations.

Successful applicants will be appointed the title of ‘Sony Digital Imaging Advocate‘, a kind-of ambassador that currently consists of 30 Sony photographers. The, um, advocates are photography educators who host events, with Sony Scene used as an online resource centre to promotes the events. Sony Scene is a major marketing initiative that’s separate to Sony’s existing ambassador program.

While Sony directly hosts some events with the advocates, many also appear independently organised and have minimal involvement from the brand. In these instances the advocate will use Sony gear and probably name drop gear, or something like that, without going overboard promoting the brand.

The advocates are ‘independent contractors’, with various working relationships with Sony. Sony states that some advocates receive no monetary compensation from Sony, others may be paid directly, or simply given ‘non-monetary benefits’ like free gear. It all depends.

A glance at the Sony Scene website shows 10 events being hosted between now and the end of the year. They range from a free photo walk in New Plymouth in New Zealand hosted by Lizzie Gilmore, through to an $850 one-on-one intro to professional photography in Melbourne with Eric Peng. Most are free photo walks, or cheap seminars. 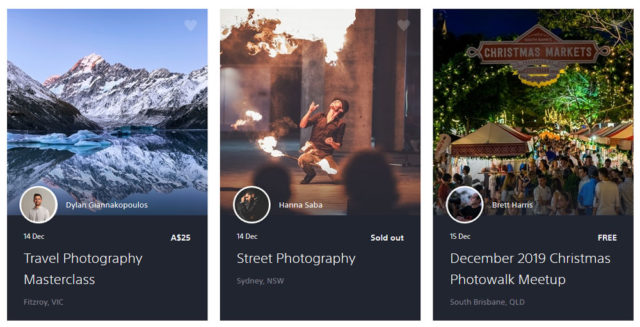 It’s an interesting initiative by Sony to win over photography enthusiasts – basically, ensure Sony gear is seen in the hands of respected photographers who host events.

Successful applicants for the 2020 Sony Digital Imaging Advocate program will be provided:
– Exclusive ability to promote workshops and events through Sony Scene
– 100 percent of revenue from each event run through the platform, minus transaction costs;
– A special starter incentive that matches earnings through hosted events with Sony digital imaging gear;
– Free Pro Support Membership;
– Access to the Sony Affiliate Program.

There will also be opportunities to land paid work or commissions through Sony, and a chance to try out new gear.