By the way, Sigma says DG denotes lenses designed to deliver ultimate in performance on cameras with full-frame sensors, and DN is for lenses optimised for mirrorless cameras with the short flange focal length. 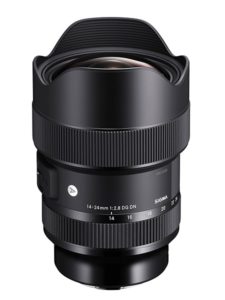 14-24mm f2.8 DG DN Art
This wide-angle zoom lens is already available for Nikon and Canon full-frame DSLRs and has been developed for Sony FE and L-Mount cameras, such as the Panasonic S and just-announced Sigma FP camera.

Sigma is framing this lens as ‘the definitive lens for astrophotography’, due to the ability to capture weak light in low sensitivity shooting.

The lens’ construction has 18 elements in 13 groups. One FLD glass and five SLD glass elements are arranged to suppress chromatic aberration to the edge of the frame. Three aspherical lenses, including a large-diameter aspherical lens at the foremost surface, are used to minimise coma flare, to achieve ‘mind-blowing resolution’.

A super multi-layer coating is combined with a newly developed NPC, a porous silica layer with nano-sized holes holding air inside.

‘Having holes of this size enables a large reduction in the refractive index, allowing the reflectance to be lowered more than conventional anti-reflective coatings,’ Sigma says. ‘As a result, reflected light causing flares and ghosting is sharply reduced, achieving clear image quality. The lens has been designed to be less susceptible to strong incident light such as backlight.’

A stepping motor enables high speed, quiet AF drive, and the lens is optimised to shoot comfortably with Sony’s Face/Eye Detection AF modes. An AFL button can be assigned with various functions to create a range of operations available on the lens.

The lens has a dust and splash-proof structure, along with a water and oil-repellent coating on the front-most surface of the lens. 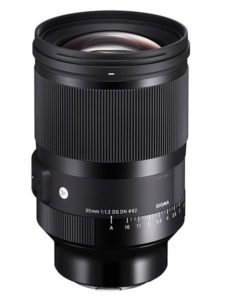 Sigma says that aberrations difficult to correct by post-processing, such as sagittal coma flare, are corrected by the compilation of the optical design technologies, and the lens achieves a resolution that can resolve over 50 million pixels.

The lens has a large Hyper Sonic Motor (HSM), using the desired torque to drive the focus lens group. In manual focus, the focus ring is driven by a wire system with is designed to respond to fine operations.

It also has a customisable AFL button, and the same aforementioned lens dust/splash-proof and water/oil repellant coating. 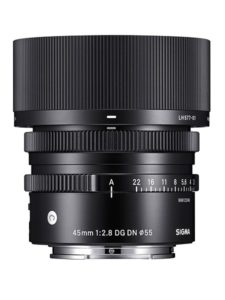 This standard prime lens is compact and lightweight, at just 215 grams. The construction has eight elements in seven groups. There’s no information on which elements are suppressing chromatic aberration in the press release, but we trust they are in there somewhere.

Sigma has instead to discuss the ‘classical’, beautiful bokeh.

‘Spherical aberration has been controlled to ensure not only the large bokeh in the front and rear of the subject but also the rear bokeh near the area in focus create a gradient to a soft blur. This lens softens the periphery of blurred images suppressing the double-line bokeh, and enhances the three-dimensional impression of the subject with the smooth expressions in the foreground and the background. In addition, its minimum focusing distance of 24cm makes it possible to enjoy shooting snapshots and tabletop photos taking advantage of the angle of view. The design gives consideration to vignetting to achieve beautiful round bokeh and subdue swirly bokeh in the whole bokeh effects.’