Photographers make bad job of it
Who’d be a photographer? According to US employment consultants CareerCast professional photography is one of the worst jobs possible, based on criteria such as ‘stress levels, work environment, growth outlook, and income.’

Worst ranked job of the lot is taxi driver – which could see some part-time photographers with a foot in two ‘crap job’ camps. (Between two stools?) Others to avoid, apparently are enlisted soldier, newspaper journalist, prison guard and pest controller.

CareerCast estimated that the annual median wage for photographers was US$34,000, just below the US median wage.

Increased use of smartphones and use of freelancers to replace salaried employees are cited as reasons for a decline in jobs in professional photography. No mention of the wholesale practice of  copyright theft, though.

Photographers thinking of a career change should consider switching to mathematics, genetic counselling or a professorship at a university.

Local distributor PROtog is the new importer of Artisan and Artist camera straps and ‘camera carrying systems’ (aka ‘camera bags’).

The Artisan & Artist range is made in Japan and combines ‘functionality, tasteful design and high quality’.

‘Well appreciated within Japan, and around the world, their photographic straps, pouches, and bags were developed especially for the user experience that enthusiasts and professionals desire.’

Artisan & Artist products had been distributed by Blonde Robot. Retailers interested in stocking the brand should contact PROtog at hello@protog.com.au.

Break those Adobe handcuffs!
Given the high levels of antipathy towards Adobe’s software rental  schemes, indicated by our Readers Poll (55 percent say it’s a scam, 34 percent say ‘tolerable but annoying’), the newest version of Lightroom alternative ON1 Photo RAW (2019.5) is worth noting.

ON1 has focussed on efficiency and workflow in its latest version, rather than tweaking editing tools or throwing new filters into the mix.

New features include:
– New ‘Dual Mode’ enables users to ‘undock’ the Browse module from the Edit module to show them on different displays.
– Edit History feature to enable comparison of versions, including a settings applied info panel;
– ‘Selective Sync’ to choose which settings are copied across;
– Improved Apple Photos Extension for Mac owners so that full RAW date is used for improved tone and colour adjustments and ON1’s layers, crop and text settings are supported;
– Hierarchical keywords have been added, enabling photographers to ‘nest’ keywords in a logical hierarchy.

This is a free update for existing ON1 Photo RAW 2019 users, available in mid-May. A perpetual licence for the current ON1 RAW version is US$79.99 – the equivalent to just a few months rent to Adobe – and includes the free update to 2019.5.

Canon’s 2019 lens plans
Canbon has released its RF lens roadmap, which gives an indication of what its focus might be for the next few years with full-frame mirorrless – and it’s all about professional-standard optics.

The recently-released, $749 RF f1.8 35mm Macro (reviewed here) along with the 24-200mm f4-6.3 are the only non-premium lenses scheduled for this year. The rest are high performance – but heavy and expensive –  L-series models. So while the Canon RF is easily the lowest-priced full-frame mirrorless body currently available, low-priced lenses are yet to be part of the equation at the sales counter. However EF Canon mount adaptors and third-party lenses might fill the temporary gap in the line-up.

Canon has also flagged there won’t be any new EF lenses in the pipeline during this period.

‘There will be more EF lenses, but probably not until next year,’ a Canon Europe spokesperson told EOS News magazine. ‘This year we’ve really got to fill out the RF system. We can only develop a certain amount of lenses a year, so you have to make a choice.

He noted that the EF range is already extensive, and most new EF lenses would only be updates of older lenses anyway.

Another nail in HDD coffin? 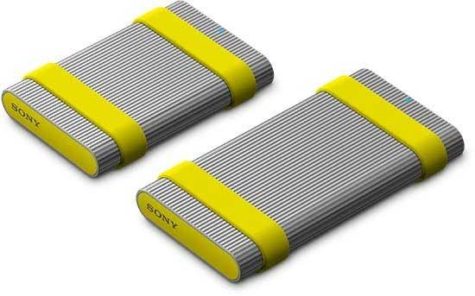 Sony has announced a new series of fast, durable external SSD drives for photographers and videographers.

Key features
– Hardware encryption with intelligent utility software included for the protection and security of content
– – Ultra tough; the SL-M series and SL-C series are dustproof, waterproof, impact proof, and extremely durable. Built from a one-piece aluminium body with an omnidirectional shockproof construction. With an IP67 rating, both series are dustproof and waterproof – the USB Type-C port is waterproof even without a sealing cap. Data is also protected even if dropped in up to 1 metre of water. They can withstand pressure of up to 6000kg and drops of up to 3 metres.
– Indicative LEDs
– Label stickers to identify different drives;
– USB 3.1 Gen 2 [USB Type-C] interface. The SL-M series achives higher speds via NVMe SSD technology.

Both of the new models with be available in 500GB, 1TB and 2TB storage capacities and will be available from this winter, with pricing to be announced.