Once again, Panasonic has produced a ‘hybrid’ mirrorless camera that caters for both still photography and movie enthusiasts and comes at a realistic price. In our tests, the review camera delivered a fine performance with the Lumix G-Vario 12-60mm f/3.5-5.6 ASPH. POWER OIS lens and we would recommend this kit to anyone looking for a walkaround combo.
RRP: Body only, $1499; with weather sealed 12-60mm lens $1799;  10x zoom kit with 14-140mm lens, $2199.

Panasonic proves it hasn’t abandoned Micro Four Thirds with the release of the Lumix DC-G95 camera, which improves on the previous models capabilities. The 20.3-megapixel Live MOS sensor is the same as used in the GH5, G9 and GX9 models and it’s paired with an ‘enhanced’ Venus Engine processor, which underpins the boosts to its video capabilities. There’s no low-pass filter over the sensor to optimise resolution.

The new camera is slightly larger and heavier than the G85 it replaces, with a deeper grip and additional controls. Dedicated buttons have been added for white balance, ISO and exposure compensation.

Internally, there have been important changes, most achieved by porting existing technologies from more sophisticated models across to the new camera. The new camera’s 5-axis Dual IS 2 stabilisation system now boasts up to five stops of shake correction. The autofocusing system has 49 selectable sensor points and uses DFD (Depth From Defocus) technology. Panasonic claims focus can lock onto a subject in as little as 0.007 second. Users can select any focus point in the frame and a new AF Sensitivity mode provides tracking sensitivity adjustments.

Tests showed the G95 to be an excellent performer with the Lumix G-Vario 12-60mm f/3.5-5.6 ASPH. POWER OIS lens. This kit is recommended for photographers looking for a versatile ‘everyday’ combo. 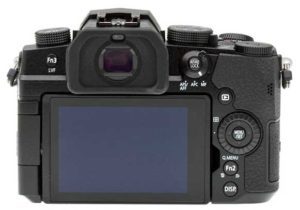 1. The G95’s magnesium-alloy diecast front frame is rugged and lightweight and has splash- and dust-proof seals around all joints, dials and buttons. The control layout has been designed to allow one-handed operation.
2. The camera’s battery can be recharged either via AC or USB and a new power-saving function can extend battery life from approximately 290 shots/charge to a maximum of roughly 900 shots/charge.
3. New internal processing functions enable the sensor to record a wide dynamic range for smoother gradation and apply optimal processing of hue, saturation and brightness to record more natural-looking JPEG images.
4. Noise reduction processing is boosted with additional processing the can preserve details and textures, especially with images recorded at middle-to-high sensitivity levels.
5. The monitor’s resolution has been increased to 1,240,000 dots and users can benefit from well-designed and integrated touch controls. The OLED LVF (Live View Finder) has a resolution of 2,360,000 dots and a magnification of 1.48x/ 0.74x (35mm camera equivalent).
6. The G96 supports 4K/25p video recording and footage can be output in real time to an external monitor/recorder via the HDMI port. A High Speed Video mode lets users record slow motion video in Full HD at 120 fps (1/4x), 90 fps (1/3x) and 60 fps (1/2x) rates. Pre-installed V-Log L enables video to be output at 4:2:0 / 8-bit depth.
7. High-speed burst shooting at is supported at up to 9 fps in AFS mode or 6 fps with continuous AF and AE adjustments. The buffer memory can store up to 300 JPEGs or 45 RAF.RAW files.