CANON EOS RP: The first entry-level model in Canon’s ‘full-frame’ mirrorless camera range is smaller, lighter and more modestly featured than the EOS R. It’s currently the least expensive full frame mirrorless on the market, although the accompanying range of Canon lenses are not inexpensive. For stills photographers who seldom shoot video, the EOS RP will provide an affordable entry into Canon’s full-frame mirrorless camera system. If video is important to you, we’d recommend waiting for a future model with improved 4K capabilities.
RRP: $2099 (with lower street prices).

With a body weighing only 440 grams, the 26.2-megapixel sensor from the EOS 6D II, and a pared-back (but traditional) control suite, the EOS RP is small, light and modestly-featured. It will suit a wide variety of photographers, from amateur to enthusiast and low-end professional. Canon needed this camera to compete with the Nikon Z6 and Sony α7 models and it has priced the EOS RP below the Z6 and the latest Sony model.
By concentrating on basic performance and functionality, Canon has delivered a ‘full-frame’ mirrorless camera that is comfortable and easy to operate and delivers excellent image quality – although only so-so video. 4K performance is hampered by aggressive screen cropping and 25 fps frame rates, and Log profiles aren’t available.

The EVF and monitor screens have lower resolution than the EOS R, and burst shooting tops out at 5 fps (or 4 fps with autofocusing). But the buffer depth extends to the card’s capacity. The small battery and single card slot share a compartment in the base of the grip.

Fortunately, the EPS RP is a competent performer for stills shooting and maintains high image quality and accurate colours throughout most of its ISO range. Overall responsiveness was above average. Autofocusing was fast and accurate for stills and FHD video clips, but not so good for 4K video. 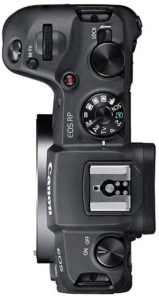 Purchasing points:
1. The only recently-released ‘full-frame’ mirrorless camera currently selling for less than $2000;
2. Well-laid-out and user-friendly controls;
3. Basic weatherproof sealing is a nice inclusion in an entry-level camera;
4. Fast and accurate autofocusing, even in dim, low-contrast lighting;
5. Clear and noise-free video in the Full HD 1080p and HD 720p modes;
6. Sharp and colour-accurate images with both JPEG and raw files;
7. Built-in Wi-Fi and low-energy Bluetooth for easy connection to a smart device;
8. Supports USB charging as well as having a separate battery charger.