The Australian Institute of Professional Photography (AIPP) has donated two cheques of $10,000 each, to the Returned and Services League of Australia (RSL) and Legacy Australia, the culmination of the Reflections Project, a national AIPP initiative that spanned two years and involved over 400 photographers in a challenge to photograph Australia’s remaining WWII veterans.

Adelaide photographer and AIPP board member Louise Bagger was the national co-ordinator for the project and says the Reflections Project was the largest co-ordinated photographic project the institute had ever undertaken. It’s arguably the most ambitious project involving professional photographers undertaken in Australia.

Around 400 AIPP members were involved in the project and photographed 6,500 of the remaining WWII veterans. Each veteran was presented with a commemorative print of their portrait, and many families wanted to purchase additional photographs.

It was the profits from these sales that were committed for Legacy Australia and the RSL Foundation.

‘The AIPP were immensely proud to donate cheques of $10,000 each to the RSL and Legacy Australia,’ said Louise.

Dr Brendan Nelson, Director of the Australian war Memorial and Patron of the Reflections Project says every member who gave of their professional expertise to the Reflections project has made a difference.

‘In photographing members of the greatest generation as they leave us, you have made a difference to them, their belief in themselves and their worth,’ Dr Nelson said.

Scott Warr, CEO of Legacy Australia noted that the donation will go toward the care and support of Legacy beneficiaries around Australia.

‘To honour our WWII Veterans was a hugely important and successful endeavour and one Legacy would like to thank the AIPP for taking up the challenge and completing it,’ he said.

Ray James, President of RSL New South Wales, says the donation is very much appreciated.’The goodwill of the AIPP is welcomed, and this money will be put to good use,’ he said.

The Reflections Project resulted in a digital display of WWII veterans at the Australian War Memorial and the creation of a two-volume photographic book for the National Library of Australia. 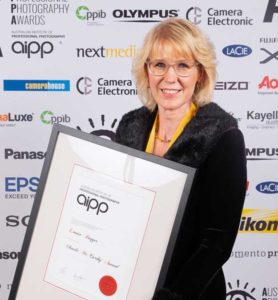 Louise Bagger was awarded the Claude McCarthy Award for her work on the AIPP’s Reflections Project at the APPAs dinner in Sydney in August.

As well as being national co-ordinator for the project, she photographed 203 of the WWII veterans herself.

‘The Reflections Project was all about creating a sensitive portrayal of our WWII veterans in their elderly years,’ said Louise (pictured right).

‘The AIPP were immensely proud to last week donate cheques of $10,000 each to the RSL and Legacy Australia.

‘This project will always be the legacy of the AIPP and I am humbled and grateful to receive the award.’

Louise said the project was especially moving as she had a 15-year career with the Royal Australian Navy.