Pentax, along with its long-established Australian distributor, the family-owned CR Kennedy, celebrated its 100th anniversary at the Cruise Bar at the Overseas Passenger Terminal in Circular Quay on Monday, December 9.

CR Kennedy has been distributing Pentax products in Australia for a remarkable 65 of those 100 years – the first and oldest Pentax distributor in the world, and surely one of the longest continuous business relationships in the history of photography.

‘This shows that Australia has also been a very important market to Pentax, and the brand presence has also been very strong,’ said CR Kennedy director, Clem Kennedy. ‘In fact, during the era of analogue photography, Pentax held the number 1 market share in this country, which is an entirely unique situation throughout the world.’

In 1919, the ‘Asahi Optical Joint Stock Co’ was established by founder Kumao Kajiwara in Tokyo, initially to manufacture lenses for spectacles and binoculars. The first camera produced by Asahi was the Asahiflex, which was also the first Japanese 35mm SLR. It was made as a prototype in 1951 and released in 1952. One of the models of the Asahiflex series, the Asahiflex IIb, was the first 35mm SLR to have an instant-return mirror, thus solving the problem of mirror blackout which had plagued SLRs up to that time. The first Pentax branded camera was released in 1957, the name riffing on the shape of the pentaprism used in SLR cameras.

CR Kennedy has been aligned with Asahi/Pentax since those pioneering days.

In 2007 optical glass manufacturer Hoya acquired the majority of shares in Pentax and in 2011 sold the Pentax subsidiary to Ricoh Corporation. 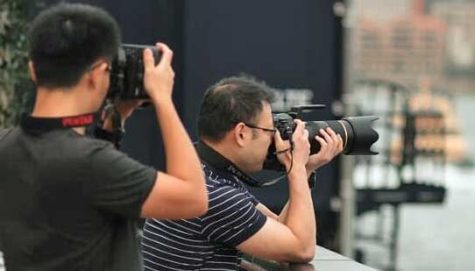 The anniversary was celebrated with a somewhat smokey and ethereal Sydney Harbour as the photogenic backdrop, by well over 150 loyal and long-standing Pentax customers, both professional photographers and Pentax-supporting retailers, along with CR Kennedy Photo Imaging group staff.

Guests of honour from Japan were Ricoh general manager Saiki-San and sales manager Aratama-San. A highlight of the event was a pre-recorded video address by Ricoh CEO, Yoshinori Yamashita-San.

A pop-up museum featured some of the best-loved Pentax models from the past, including the MZ-5, Zoom-70, Zoom-90WR, Auto 110 Super, ME Super, Spotmatic, LX, and something from the future – a pre-production model of the new Pentax APS-C format DSLR.

Pride of place went to a rare and valuable gold Pentax LX.

‘This camera was designed to commemorate the 10 Millionth SLR camera being sold in 1981. There were only 300 of these cameras made with a solid gold casing and snakeskin leather,’ Clem explained.

Images from CR Kennedy staff shot on a range of Pentax cameras were also on display, along with a display of advertisements and other marketing material from the past, and a photo studio set featuring models and a custom-made retro motorcycle from Cleveland CycleWerks in the US.

There was a separate merchandising desk with 100th anniversary pins, caps and T-shirts, along with Pentax products at special 100th Anniversary prices. The Pentax K1, KP DSLRs, along with the Ricoh Theta V 360-degree stills/video camera and Ricoh GRIII premium compact were in stock on the night.