One day at Head On

Only the Head On Photo Festival in Sydney could build a platform that features an Iranian and Israeli, sitting side-by-side, discussing the power of photography. Or so said Oded Wagenstein, Tel Aviv-based documentary photographer, as he sat next to Iranian asylum seeker and refugee photographer, Ali Mousawi, at a free Head On Conversation on Saturday, May 4.

He attributed this notable pairing to photography bringing people together – a vehicle to create change. The room felt it. And at the Imperial Hotel in Paddington, of all places!

Oded is in town for the 10th festival that runs until May 19, exhibiting Like Last Year’s Snow.

Some names are familiar, others are not. Familiarity is irrelevant: Head On is not, and never will be, about the profile of a photographer. It really comes down to production of quality and meaningful photography.

Paddington Town Hall is home to the Festival Hub, with the large open space upstairs a cornucopia of exhibitions and artist talks.

The Rohingya desperately fled Myanmar to escape ethnic persecution, with over a million displaced people welcomed by neighbouring Bangladesh, despite its own economic challenges.

David briefly covered the complex political situation in Myanmar; difficulties on the ground; challenges photographing survivors of violence and rape; and how to distribute the images to earn an income.

The trip cost David around $5000, and it didn’t sound like he made good on that investment. Photojournalists can’t really be in the job to chase riches, he explained. Fortunately his film stills and editorial work allows him to fund hard-hitting photography projects.

Next up was freelance Italian photographer, Camillo Pasquarelli, who had an unforgettable background story for his portrait series, The Valley of Shadows.

The monochrome images are of blind villagers from Kashmir, a territory disputed by India and Pakistan. Indian security forces use ‘non-lethal weapons’ against protesters, and have adopted shotgun shells that spray lead pellets.

The pellets become lodged in the body and head, leaving many blind. Camillo said some victims he’s interviewed are not protesters, but were in the wrong place at the wrong time.

The controversial weaponry is known throughout Kashmir, but hasn’t reached the attention of a global audience on the same scale as other issues.

Victims fear retribution for speaking out, making it difficult to cover. Camillo didn’t plan to either, until he attended a UN-run workshop for the blind. There he met pellet victims, among others with genetic eye conditions. The power suddenly cut out, and the classroom fell into darkness.

Camillo shot a few portraits while waiting for the power to return. He used a single flash operated by an assistant, and a black sheet to cover the harsh bright green walls. He later visited one of his subject’s homes, who showed him an X-ray detailing the pellets lodged in their head. The man explained that he can only see shadows.

Camillo realised this was a powerful way to tell this story, and collected other victim X-rays and testimonies.

Next to speak was Finnish fine art photographer, Aki-Pekka Sinikoski, with his daughter Astrid Sinikoski. But there was far more to see outside the hub. In hindsight – after seeing Aki-Pekka’s haunting or outright bizarre portraits of Astrid in New Ghosts at the Royal Botanic Gardens days later – leaving was a poor choice.

Next door to the Hub is the Paddington Reservoir Gardens, a flawless outdoor space perfect for photographic installations. It is the perfect size, with symmetrical pillars and walls drenched in natural light for most of the day.

Organisers made good use of the Garden’s graffiti-covered Eastern Chamber, a dilapidated  underground space with an abandoned warehouse vibe.

The pictures contain political messages about the way indigenous Australians were treated as property by white landowners, and not much more than flora and fauna by the state. But they also explore the deep cultural connection to country, and the rebirth of native identity. 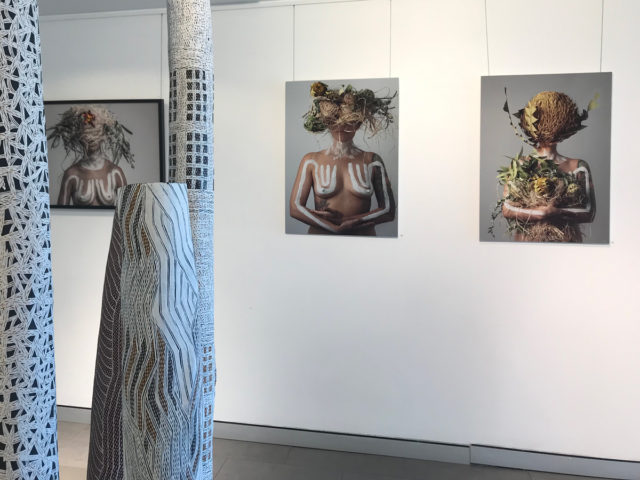 It’s the gallery’s first photo exhibition since opening in 1981, and Michael’s second solo show as a Head On Featured Artist.

‘It has been a natural progression, which has happened fast,’ Michael told Inside Imaging. ‘I’m proactive and go for it, taking opportunities while I can. Head On has given me a lot. It’s great. These are like stepping stones and I’m excited for the next challenge.’

Michael’s talk had a full house, with around a couple of hundred through the doors on opening day, an nine print sales.

As an emerging artist, Michael says Head On pushed him to be more professional. He thought deeper about building a narrative, and worked on the smaller things like writing an artist bio and photos titles.

‘I’ve been in contact with emerging indigenous photographers over the last couple of months, encouraging them to go see Head On and also apply to be part of it. I didn’t know about Head On until four years ago, and now I’ve been involved in it three times. It encourages an emerging photographer to take the next step, not be lazy, and pull a series together.’ 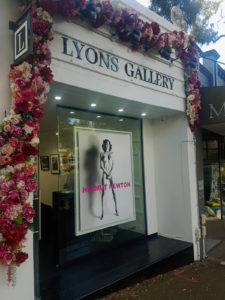 His photo gallery is dripping with celebrities, pop stars, fashion, and royalty. It’s a ritzy joint. The Helmut Newton collection was matched by Terry O’Neill prints and iconic photos of famous people.

Caterers were putting champagne on ice upstairs on the terrace, setting up for an opening that evening. Here, a bedroom had a Louis Vuitton suitcase with Lyons initials inscribed on the handle, with a massive Elton John print above the bed, and an antique minibar beside it.

‘Wait, are we in Darryn’s room?’ It was part of the gallery, but probably his room as well. We may never know.

As an art dealer, Lyons told us that buying and selling photographic prints is better than property investment. ‘You just have to know what you’re buying’.

The Lyons website has a page dedicated to promoting art investment and corporate spending. Apparently contemporary art has a compounded average return of 10.85 percent per annum, and is ‘completely uncorrelated’ to the world’s unpredictable stock markets, making it a excellent for portfolio diversification.

Plus, all sales under $20,000 are tax deductible. And it’s a tangible asset, unlike stocks and shares. Why not buy some blue-chip Newton prints? Cleaner than dirty ol’ coal!

Dina’s prints back downstairs were unfortunately crammed into a back corner. Her surrealist approach shares a resemblance to work by David LaChapelle, with less popping colours and elaborate design.

It deserved a better space than that back corner.

The Head On Photo Festival is, once again, a ripping success, hitting yet another high watermark for its milestone 10th anniversary. Not only does it bring amazing photography to Sydney, but also the artists who create it. The free artist talks and panel discussions are indispensable, and complement the festival program.

What makes Head On more remarkable is that behind the scenes there’s an extremely limited funding pool, and a tiny team of dedicated volunteers led by the tireless efforts of director, Moshe Rosenzveig.

Fujifilm and Sony are the two major industry sponsors, and deserve kudos and thanks for their contribution to Australia’s cultural landscape through Head On. But overall, the festival could really do with more support from the photo industry.

Head On runs until May 19 across Sydney.