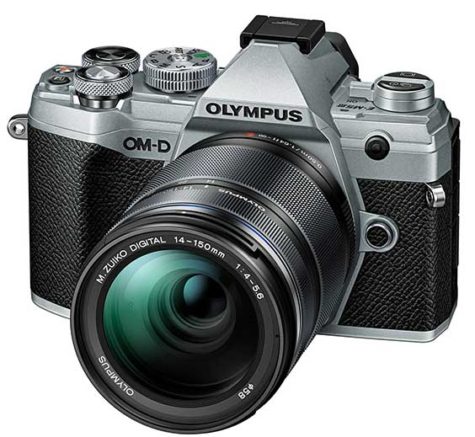 Olympus claims that lower power usage has enabled the use of a smaller (BLS-50) battery, which has further added to the compact design.

The body is sealed for dustproof, splashproof, and freezeproof operation. It is also equipped with SSWF (Super Sonic Wave Filter) that vibrates the image sensor filter 30,000 times per second to drastically reduce the amount of dust and dirt that ends up in photos.

It can shoot at up to 10 fps using AF/AE tracking. The moving subject tracking algorithm utilises AF information from both Live View images and recorded images to enable quick tracking of unpredictable subject movement and changes in subject speed.

A new 5-axis IS unit was developed to deliver image stabilisation in a compact, lightweight body. Based on camera shake information obtained from the high-sensitivity gyro sensor and image analysis, the TruePic VIII image processor controls the IS unit to enable up to 5.5 shutter speed steps of compensation performance.

In addition to angular and shift blur, roll blur, which cannot be compensated for by in-lens image stabilisation only, is corrected for powerful handheld shooting support.

The viewfinder carries over from the E-M1 II with a 2.36 million-dot, high-contrast OLED panel and optical system with a long eyepoint to make framing shots easier and more accurate.

Live Composite overlaps multiple shots recorded at the same shutter speed and composites only the sections that are brighter for capturing light trails. This feature helps prevent the common phenomenon of images that are too bright overall when shooting long exposures.

Users can check the progress of light trails in real-time using Live View, something that is not possible on an SLR.

Pro Capture mode makes it possible to record scenes that are difficult to time at a full pixel count of 20M, such as a bird taking flight. From the moment the shutter button is pressed fully, 14 frames are retroactively recorded, and up to 30 fps high-speed shooting is available in Pro Capture

Focus Bracketing can capture up to 999 shots with a single shutter activation while shifting the focal position slightly between each shot. The amount of focal shift can be selected from 10 levels, and recorded images can be combined into a single image using Olympus Workspace image editing software.

The camera is also equipped with Focus Stacking, which automatically composites images on the camera. Eight photos with different focal positions are composited on the camera for a photo with a greater depth of field that is in focus from the foreground to the background.

…But that’s not all – nowhere near it: to decipher the somewhat dense, 8-page press release, click on the following: Olympus-OM-D E-M5-Mark-III – October 2019