The X1D II 50C will be available from July with a US suggested price of US$5750, the X System zoom lens in October for US$5175, and the CFV digital back (and 907X body) will have release details later this year.

X1D II 50C
The 50-megapixel CMOS sensor (43.8 x 32.9mm) is 1.7 times larger than a 35mm full-frame sensor, and appears to be the same sensor as used in the predecessor, the X1D 50C. The camera has a dynamic range of 14 stops to capture fine details in shadows and highlights, with plenty of room for post-processing adjustments. 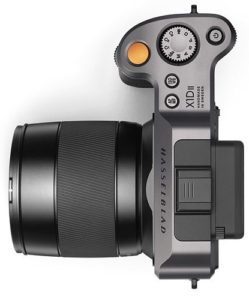 The X1D II 50C has a higher resolution OLED electronic viewfinder, with 3.69-million dots and magnification of .87x.

A new processor allows for a faster refresh rate in live view, reduced shutter lag, black out time between frames, and the camera fires up in almost half the time. It has a continuous capture rate at 2.7fps.

‘Building upon the highly-intuitive user interface of the previous model, further refinements have been made to the X1D II 50C to improve the camera’s handling experience, including the ability to access the menu system when looking in the EVF, giving greater usability in the sunniest conditions,’ the press release states.

All up the camera isn’t a major upgrade on the X1D-50C, but has a considerably more competitive price. This may be partly in response to the comparatively cheaper medium format cameras released by Fujifilm (and Pentax).

The lens has quick autofocus and an internal focusing system doesn’t change dimensions throughout the zoom range. Hasselblad reckons it’s the best zoom lens ever made!

‘This really is the best lens Hasselblad has developed – its performance is extremely high, competing with our prime lenses,’ said Per Nordlund, Hasselblad lead optical designer. ‘I can even go as far to say that it’s probably the best zoom lens currently available on the market.’

There’s no other information, other than that the lens is compact and weighs 1115 grams, and has a central lens shutter that offers exposure times from 68 minutes to 1/2000s with full flash sync.

CFV II 50C
Hasselblad is developing a modernised digital back, the CFV II 50C, compatible with most V System bodies from 1957 onwards; along with the 907X body which mounts XCD lenses with the new back to create a ‘fully-fledged modern digital medium format camera system’.

The battery is the same that’s used on X System backs, which reduces the overall size and allows the back to be recharged via the USB-C port. Coupling the CFV II 50C with Hasselblad’s smallest medium format camera body, the 907X, creates a compact package.

With the 907X, photographers gain access to all of the X System lenses and a range of Hasselblad optics via adapters, including the H System, V System, and XPan Lenses. The 907X also has compatibility with a wide range of third-party adapters and lenses. Planned accessories to complement the combination include the 907X Control Grip and 907X External Optical Viewfinder.