The Elementice Walker is a compact and portable battery-powered device that’s mounted to a photographer’s camera while shooting an event. By connecting to the camera via USB or WiFi, photos are temporarily stored as JPEG files on the Walker’s internal storage, and then uploaded online to generate a gallery. The Walker has a barcode/QRCode scanner, which the photographer uses to categorise images into a personal gallery and distribute to individuals or groups at the event.

Elementice founder Peter Presneill (right), along with an early adopter of the Walker, EventPix operations manager Trevor Connell, both told Inside Imaging the technology offers clients a unique new service and can save hours of cataloguing work.

One of the Walker’s first field tests was at Mt Perisher during the snow season, where roaming photographers captured skiers and used their lift pass barcode to deliver pictures to the online Perisher Dashboard.

‘Up at Mt Perisher during the snow season, for instance, the photographer scans the person’s lift pass, an RFID tag, and the photos are uploaded by the Walker via 3G or 4G, watermarked with the Perisher logo, and put into a personal gallery in mere seconds.’

The Walker can scan RFID, QR and Bar-Codes, which commonly appear on event tickets, wristbands, or lanyards. If attendees aren’t carrying a scannable ID, or aren’t comfortable with a third-party channeling their contact details from a ticket, the photographer can carry a fistful of gallery cards with QR codes printed on them. A photographer captures images of attendees, scans a gallery card and hands it to the subject, who uses a smart phone to scan the barcode and access the gallery.

Most smart phones can scan barcodes with its camera, meaning a third-party app isn’t required to access the gallery. Peter says the gallery card method is a favourite at events with high profile individuals, who are often not keen to provide their personal information.

Here’s a video demo of the technology.

Photographers can also use gallery cards to catalogue images as they shoot, Peter says, if an event organiser requires specific shots – such as branded photos to instantly upload to social media. This could potentially improve workflow, as post-production time is reduced by categorising and delivering images during the event rather than afterwards.

Speaking of post-production, the Walker pictures are straight-out-of-camera JPEGs which cannot be edited.

Integrating barcode scanning into event photography has existed for some time, with the technology offered in various ways by numerous companies. Inside Imaging reported on NetLife Photolink, an automated subject mapping/tagging system that uses tethered shooting and barcodes, in 2015 and 2017. A Google Search reveals other variations of the technology also.

But Peter believes the Walker is more advanced than anything else on the market.

‘So many people have been burned by similar companies that promise to take photos and deliver them straight back instantly. But then they discover the person uses an iPad to take a bad photo, or they have to collect a mobile phone or e-mail address, and it becomes this slow and arduous interaction. With us, the photographer snaps the photos, scans a gallery card, and hands it to the person. No personal information is exchanged, and they have control and it’s personalised.’

The company recently won the Best Technical Achievement or Innovation category at the Australian Event Awards, for the use of the Walker at the Supanova Comic Con & Gaming 2019.

While Peter is trying to gain traction with photographers, he says some felt threatened and weren’t interested in changing their workflow.

‘We realised we need to pitch this to photographers, but when we went to them they saw us as competition. We don’t want to compete with photographers. We’re not service providers. We’re just trying to build tech that helps photographers do business better. That’s the goal.’

Trevor from EventsPix has become a sort-of ambassador for Elementice. He says his photographers find it most useful when shooting high volume events – such as awards, presentations or conferences – where punters want photos instantly for social media.

‘The two of the biggest bugbears for my photographers are, first, set a shot up such as an awards presentation, and a punter pokes their phone over your shoulder. Second, set up a shot in a studio then the punter hands their phone to the photographer and asks them to get a shot on it. In both instances, it’s because they (the punter) has to have the photo on social media now. Now we just tell them, politely, to scan the QR code and share a decent photo.’

Going back through EventPix jobs from the last year, Trevor said around 50 percent of jobs could have used the Walker. He’s begun promoting it to more than half of his new clients, and while some of them aren’t interested others ‘love it’.

‘The areas in our business where it is not applicable include editorial, some social functions, store and product shoots, portrait shoots but it is great for multiple headshots, and corporate events where the client wants to preview the images before they go out’.

The Walker unit costs $550 to purchase, and also requires an active ‘Elementice subscription’ that starts at $200/month per device.  Peter says the gallery cards or SMS delivery are a considered a ‘consumable’, and come at an extra charge. So it isn’t exactly cheap or necessarily viable for all event photography businesses.

Elementice born in Perisher
While Elementice only brought the Walker to market this year, the technology was founded five years ago when Peter and his friends were snowboarding up at Mt Perisher. Like many others, they were taking it in turns to snap shots at the bottom of a jump which meant someone had to miss out on a run.

Peter says Elementice scored an ACT Government ‘technical innovation grant’ to install and trial an automatic camera device, the Kicker, at a Perisher ski jump in 2015.

The way it works is there is a ‘reader’ unit at the top of the jump, where a skier scans their lift pass. This wirelessly 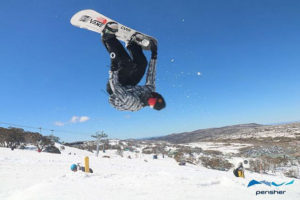 activates the camera, which is inside a heated and weather-proof enclosure aimed at the ski jump. The camera captures the skier as they hit the jump, and the photo is delivered to the individual’s Perisher Dashboard with the Perisher watermark.

Peter says the Kicker is free to use and can capture up to 2500 photos per day. Perisher Blue, the ski resort authority, has since commissioned the Kicker every year as it provides ‘instant branded content and enhances the guest experience’.

Elementice is also finishing development of an automated photo ‘Booth’ and ‘Printer’.

The Booth is the same technological concept as the Walker and Kicker, but with a photo booth. As for the Printer, guests will have the option to select an image from their gallery and print it on location.

‘There is no app or drivers to install on people’s phones – they just press the “print” button on their gallery page, and our system internally handles the print request and getting the correct image to the printer on-site,’ Peter says. ‘One of the best use-cases I can think of is at weddings, where there can be a photographer with a Walker taking photos, then the guests can take the same gallery card over to a Booth and get more fully automated images; and then when looking at images on their gallery, select a few to have printed automatically on site.’

Elementice use a compact DNP DS40 dye-sublimination printer, which can produce up to 400 4×6-inch prints.

‘We did a wedding fair recently where VIPs were given a tote bag with a picture frame inside. VIPs were able to get a photo of themselves from a Walker photographer, then print that image from their phone and put it into their keep-sake picture frame. It was cool showing couples that all the uncles/aunties and friends could have frames pics to take home instead of waiting weeks.’

Peter says the next step for Elementice is workflow and building ‘something special for the high volume photography industry’.

Click here to find out more about Elementice products and services.