Wedding photographer James Day, with help from a team of contributors, recently coordinated a multi-sensory wedding experience for a blind bride, resulting in a tactile custom wedding album.

James went far beyond the role of a photographer for his clients, Steph and Rob, spending over a year working closely with the family and videography team to deliver a next-level experience.

‘The question that was going through my head is “what can I give a client with no eyesight”,’ he told Inside Imaging. ‘I thought that wedding photography should add to the day – help encourage moments that are then captured.’

James had known Steph since high school. She has Cone Rod Dystrophy, a genetic eye disorder which she inherited from her mum, who is also blind. As Steph was losing her vision, she asked James to photograph her so she could remember how she looked.

Years later Steph and her partner Rob were engaged, and James was booked to photograph their wedding in late 2018.

The award-winning photographer, along with the videography company, Lemon Tree Film House, agreed to shoot the wedding for free – so long as they had permission to go big, tell the story, and draw in publicity.

James said he’s inspired by a US photography educator and public speaker, Jesh De Rox, who blends motivational speaking with practical professional advice for photographers and creatives. He runs a photography education business called Superfeel, which offers guides on how to draw emotion out of clients and subjects.

‘Jesh pioneered this thing I’d call experiential photography. The experience is key, and at the end you deliver a souvenir of the experience. I’ve been to a few of his workshops, and ended up Skyping him, and he helped refine the idea of what I’d deliver at the end’.

They decided to incorporate smell, touch, and sound from the wedding into the photo album.

‘During the wedding there were 10 scents and fabrics. The scents were essential oils, and they were infused into the fabrics,’ James said. ‘At different key points throughout the day, such as when Steph’s dad walked down the aisle, she was handed a fabric to touch and smell. The idea was that in the future the materials and scents would help remind her of a moment. In a way, this is like photograph – a way to store the memory.’

The custom photo album, designed for free by Vision Art in America, was the most technical challenge of the project.

‘The album has 10 spreads. Each spread has a fabric Steph felt during the wedding, mounted into the album. Logistically we decided not to combine the scents and fabrics in the book, as they’d all infuse into one big scent and it wouldn’t work. So the book has mounts that hold the scents in bottles and they are kept separate.’ 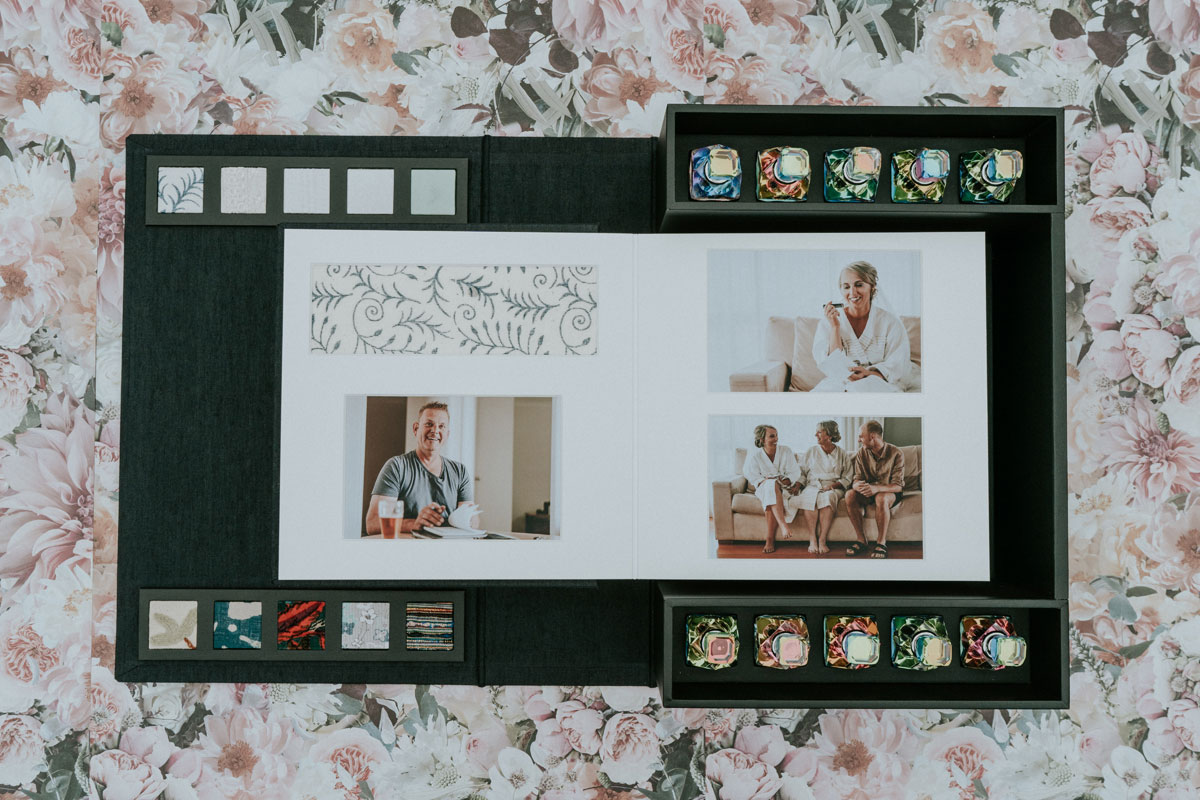 Each spread also has an audio player, similar to those jingly birthday and Christmas cards which play a song when opened. Lemon Tree Film House brought additional audio recording equipment to the wedding to record sound for the book.

Vision Art designers incorporated a wireless charger into the player, to charge batteries without dismantling components of the album.

‘Vision Art took my idea to the next level. I can’t claim any credit for the components inside the book, like the speakers and wireless charger,’ James said. ‘They knew it wasn’t good enough if it wasn’t rechargeable, and so they made it work.’

The owners of Vision Art clocked over 90 hours designing the book, and also flew to Sydney to meet the couple and present them the gift. 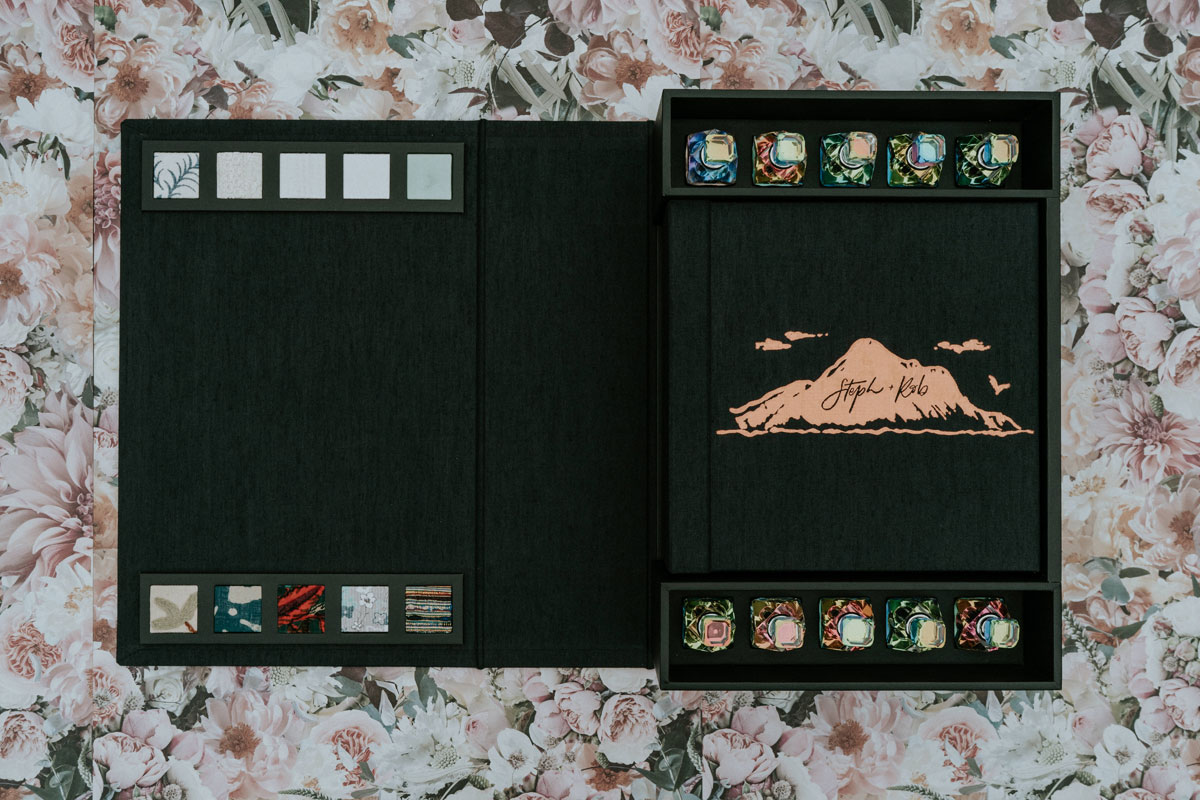 James also created several tactile prints for Steph and her mum, which were created using a Pictures In A Flash (PIAF) graphics machine at the Vision Australia head office in Parramatta.

The images are printed onto a special paper, and the PIAF machine heats the paper which puffs up in dark areas covered with lots of ink, creating a texture for blind people to touch and conceptualise the graphics.

‘Some images worked better than others, but we could also add extra ink by drawing on the photos, adding dark sections to where there were subtle and faint important elements, such as rainbows. It definitely didn’t look as good, but these prints were for Steph and her mum.’

(James says that while he paid for Vision Australia’s services, the organisation offers free PIAF printing services to its clients)

‘While I pulled a lot of this together, this is all about the generous contributions from all the people involved. The thing I’ve learnt as a photographer is how important it is to have a team to support and back you.’

Lemon Tree Film House created a tear jerkin’ 20-minute video about Steph and her condition, how she met Rob, the proposal, pre-wedding planning, the big day, and the delivery.

Sony Australia also supported the project, and had a video screening at a private Sony cinema in Sydney.

The project came at a considerable expense to James, Lemon Tree Film House, and Vision Art.

Beyond the good karma headed their way, the story went viral and performed pretty well as a marketing exercise. So a classic case of ‘doing well by doing good’ – we hope.