A New Zealand couple have hit out at their wedding photographer, Mike Sheng, in a television segment, claiming he went way overboard with Photoshop, failed to deliver photos, and has ended communication with them.

The couple, Irene and Andrew Leathwick, were married in Hamilton, New Zealand, in November 2018. They hired Sheng, a New Zealand-based photographer who specialises in Chinese ‘fly-in-fly-out’ wedding shoots, for NZ$4000 (around $3725) and told TVNZ’s consumer affairs program Fair Go that everything was perfect on the day.

‘He was really, really professional,’ Irene said. ‘He knew exactly what kind of shots we wanted, and he knew how to talk to us and act natural. Everything a professional photographer should do.’

When the couple received two sets of preview low-res shots, including unedited and edited versions, they noticed Sheng used the Photoshop Liquify tool to alter Irene’s figure and make her appear skinnier, particularly in the face, arms, neck and chest. Andrew, however, didn’t receive the same post-production treatment.

‘I was pretty disappointed, because I just wanted to look in the photo actually how I looked on the day,’ Irene said. ‘The first thing I noticed was that, well, I looked a lot slimmer. It was pretty obvious. My arms especially. I said to Andrew, “I haven’t been that skinny since I was 10”.’

The Leathwicks claim that post-processing was not discussed, and Sheng’s edits surprised them. They contacted the photographer to ask if he could redo the editing, but Sheng said he’s too busy with other clients and doesn’t have time for it. 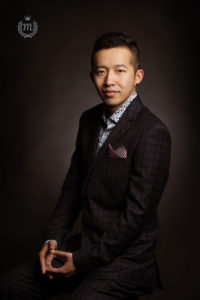 The couple claim Sheng (right) told them he deleted all the RAW images and it would be difficult to satisfactorily re-edit the JPEG versions. Additionally and strangely, Sheng’s contract with the Leathwicks apparently included a clause that granted the couple access to all the RAW image files, which many professional photographers would never agree to do.

The photographer is no longer in contact with the Leathwicks, after blocking them on social media and refusing to speak with Fair Go. He has only delivered two re-edited high-res images from a set of 60.

The New Zealand Institute of Professional Photography (NZIPP) utilised the wedding-photographer-behaves-badly segment to highlight that Sheng’s actions do not meet NZIPP standards and he is not a member.

‘As a photographer I tend to only touch up anything that might be a blemish or something that’s kind-of obvious that might need touching up,’ Ollie Dale, NZIPP president, said to Fair Go.

Dale added that editing should always be discussed, ‘it would be rude of me to touch up a client in a way that might make them self-aware of how other people see them’.

‘It’s all about communication. You have to be able to deliver what you say, and say what you’re going to deliver.’

The NZIPP deserves credit for taking the opportunity to promote its existence and professional standards on national television. During the numerous occasions that Inside Imaging has stumbled upon a mainstream media report on ‘Australian wedding photographers behaving badly’, the AIPP has rarely contributed to the narrative, despite it being a perfect platform to alert the public to the AIPP and its values.