The Museum of Photographic Arts (MOPA) in San Diego, California, is showing a major exhibition of contemporary Australian photography until September.

Deborah Klochko, MOPA’s executive director and chief curator, told Inside Imaging that Australian photography is not easily accessible in the US, so she sought advice from local experts.

‘We realised that we didn’t have the expertise, and we didn’t want this exhibition to be from the perspective of an outsider looking in,’ Deborah said. ‘It’s one thing to come from another country to say “I like this and that”, but it doesn’t really get into the vitality of what’s going on there. So we invited five Australian curators and former curators to nominate work.

‘There was a total of 30 photographers they recommended, and out of that 30 we selected 13. The 13 were based on what two or more of the nominators agreed upon.’ 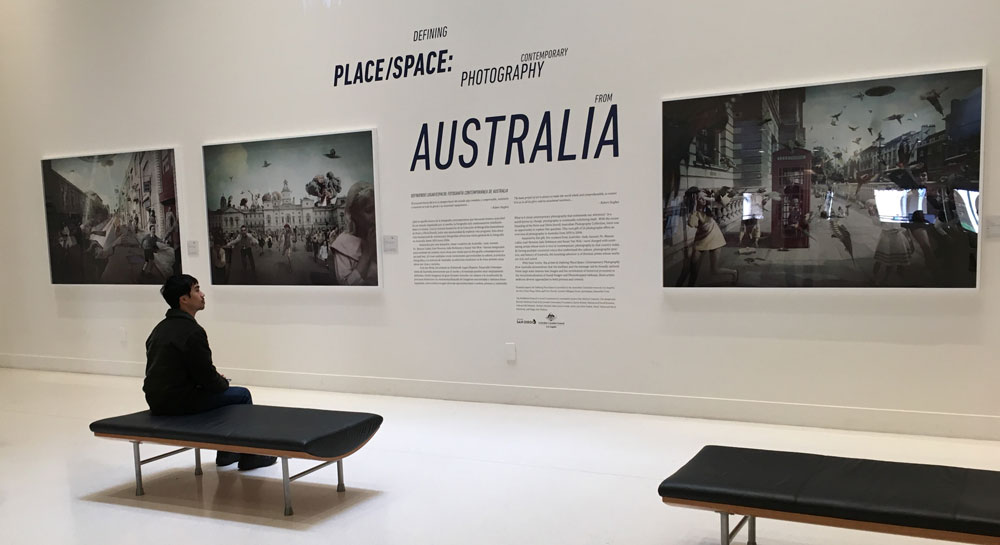 Here’s the exhibition description:
Defining Place/Space shows that art-making in Australia is not just about the flora and fauna of the country. The artists reflect many different perspectives on the creativity that exists in the country. The nomination of four Aboriginal artists touches upon the country’s relationship with indigenous people, and the ways that history affects art-making. Defining Place/Space is more than what people will expect. It shows a country at the forefront of photographic image-making, opening a dialogue with the rest of our world about the place Australia holds in the creation of art.

Inside Imaging interviewed Deborah last week during the exhibition installation, and she was thrilled by what was going up on the gallery walls.

‘It’s dynamic and exciting work, the majority of which we haven’t had an opportunity to see. I’ve been in the field of photography for decades now, and I’ve found this very, very exciting,’ she said. ‘When I look at the images I see a variety of approaches – work that’s rethinking 19th century process, such as Daguerreotype, which James Tylor uses to make a powerful statement about how indigenous people were treated, and their relationship to the land that was taken away.

‘Then you have someone like Justine Varga, who operates on a large-scale and is creating works that may not seem like portraits, but are ultimately quite personal and representing an individual.’

The museum is also producing a photo book, featuring images from the exhibition and essays written by Yamatji/Nyoongar photomedia artist and curator, Glenn Iseger-Pilkington, and Dr Shaune Lakin. Deborah is working with the Australian consulate in LA to have the book distributed in Australia.

Located in Balboa Park, San Diego’s picturesque public garden, which is larger than New York’s Central Park, the museum has a library containing 22,000 volumes, an archive of 9000 images with a focus on Pacific Rim, a 226-seat movie theater, and a gallery.

Defining Place/Space has been on the cards since 2016, after Peter and Olivia Farrell donated a collection of 24 historic and contemporary Australian photos.

After acquiring the collection, MOPA doubled-down on its interest in Australian photography, with Deborah scheduling visits here and building local connections.

‘What I found surprising is that while the quality of fine art photography in Australia is so great, there’s not as much support for it as I would have expected – the number of institutions, and funding available isn’t quite there. I think this needs to be rethought.’

Deborah noticed that the Australian arts financial support is largely government-based and this funding pool appears to be drying up. Whereas in the US arts funding primarily comes from the private sector such as donors, corporate sponsorship and grants, and philanthropy.

‘So maybe here’s an opportunity to say “this work is getting global attention, and it has value”. Perhaps this will lead to more corporate sponsorship, or other opportunities to rethink the funding model. It could be a possibility.’

Defining Place/Space: Contemporary Photography from Australia will be showing for free at MOPA in San Diego, California, until September 22.