Volume down, value up in camera market

The infographic below from Statisa (“The Statistics Portal’) charts the recent history of the photographic industry via the CIPA (Japanese camera manufacturers) annual shipment data: 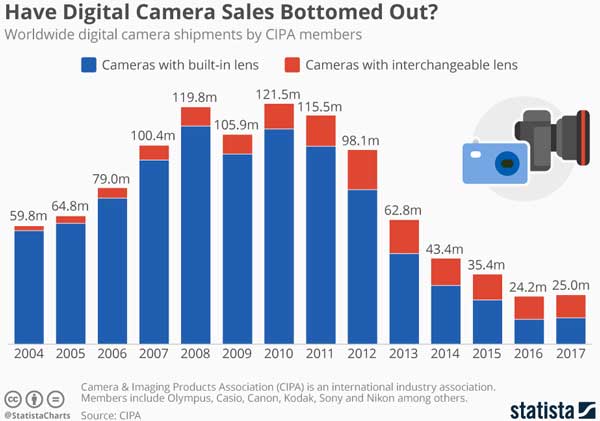 Statisa analyst Felix Richter postulates that the market may have bottomed out in 2017: ‘As our chart illustrates, global camera shipments by CIPA members dropped by nearly 80 percent since peaking in 2010. On a positive note, it appears that the industry managed to stop the bleeding in 2017, when shipments improved by 3 percent after five consecutive years of double-digit declines.’

Maybe. But the dip in 2017 followed by the slight rise in 2017 is more likely attributable to supply problems in 2016 brought about by the Kumamoto earthquake. In which case the decline continues – but at a much less dramatic level than in recent years.

Certainly the January 20128 CIPA figures don’t inspire confidence. Total shipments are down 28 percent compared to January 2017. (Although camera makers were probably still playing Kumamoto catch up in January last year, which may have made the gap greater than it otherwise would have been.) 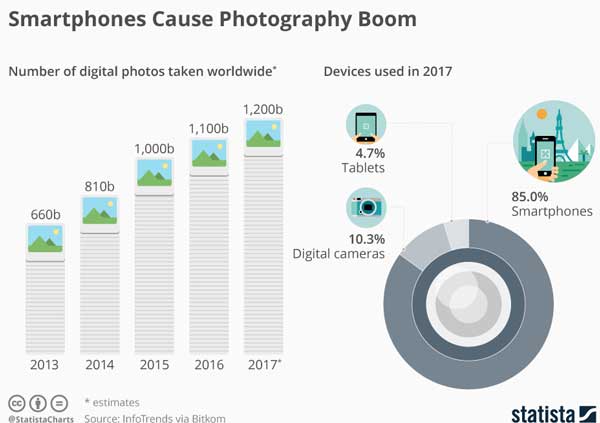 The chart above, from Infotrends out of Statisa, shows just how ubiquitous smartphones are as picture-taking devices, and consequently how critical and urgent the need for an easy, ubiquitous software solution for making hard copy photo products from smartphone images. Reading the reviews of the various photo printing apps in  the Google and Apple app stores indicates we still have a way to go.
– Keith Shipton