Panasonic has announced July availability of the $599 Lumix FT7 rugged compact camera – the first with a viewfinder as well as LCD screen.

The FT7 is waterproof to 31 metres and freezeproof to -10ºC, dustproof, shockproof to two metres, and pressure resistant to 100 kgf. It has a 1/2.3-inch MOS 20-megapixel sensor; 1170K-dot Live View Finder (LVF); 4K video; and a 28mm, folding 4.6x zoom lens with optical image stabilisation. 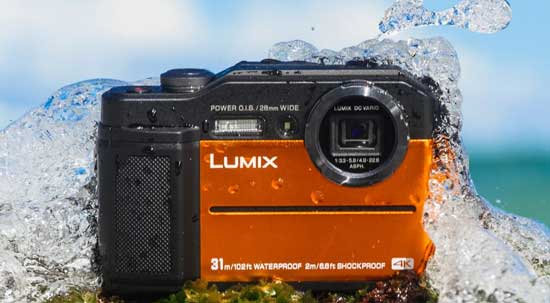 The FT7 body case has been thickened to withstand underwater pressure, the folded optics reduce potential for damage to the lens, and the rear monitor is protected with tempered glass. Rubber padding and reinforced glass inside the camera form an airtight body protected against water immersion, dust and sand.

The camera also includes a built-in compass, altimeter and doubles as a torch via the LED.  And of course the usual Wi-Fi, geotagging and remote control via smartphone. It can be charged via USB cable direct to the camera.

Video is at 4K – 3840 x 2160 at 25p. 4K Photo with 4K Pre-burst mode shoots 30 frames per second before and after the shutter is released ‘to capture the defining shot’. A Post Focus feature allows you to choose the focal point of an image after it’s been taken.

It supports high-speed burst shooting at 10 frames per second at full resolution – well, according to the fine-print, for up to 11 frames at least.

There are 22 filter effects, high-speed video (1280×720 at 100 fps), time lapse and stop motion animation. It will be available in orange and black.