Sony’s latest electronic viewfinder (EVF), the ECX339A OLED Microdisplay, announced this week and going into mass production by November, increases resolution from 1280×960 to 1600×1200 (UXGA), the highest in class for a 0.5-type sensor. 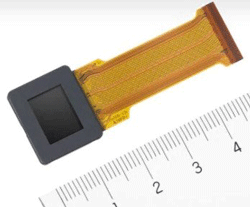 Although the difference in resolution is minimal to the naked eye, perhaps more importantly the refresh rate has been doubled – from 120fps to 240 fps. The previous model EVF is used in high-end Sony mirrorless cameras such as the A9.

‘This has made it possible to capture fast-moving subjects in the viewfinder with higher accuracy, so users will not miss a photo opportunity, delivering a more comfortable shooting experience,’ Sony stated in its announcement.

The new EVF seems prohibitively expensive at over $500 per unit. (Maybe they will cut a better deal with the Sony Imaging business!)

As well as high end still and broadcast cameras, Sony expects this new OLED Microdisplay to be employed in a diverse range of fields such as AR (augmented reality) and VR (virtual reality) head-mounted displays.

Electronic viewfinder technology just keeps getting better, while optical viewfinders are probably as good as they will ever be. By stealing a march on competitors (some of whom are also customers) with ever-improving EVF and sensor technology, Sony continues to present a moving target.

Sony A7S III about to drop?
Meanwhile, a Sony Europe executive speaking to the media at NAB 2018 in Las Vegas let slip that the next Sony  full frame E-mount camera – the Sony A7S III – is coming soon, possibly as early as July.

It will continue along the path of high performance, relatively low resolution sensor and extreme low-light performance.

Daily Camera News reports that Amazon Germany has a manual listed for release on July 2 titled Sony a7 III/a7S III: For better photos right from the start!