Pricing and availability will be announced later, besides the 60-600mm which ships in late October with American pricing at US$1999.

Sigma is also reportedly developing a full-frame L-mount camera with a Foveon sensor. This is part of the L-Mount Alliance Sigma has forged with Panasonic and Leica.

Sigma says all its future cameras will feature the L-Mount, marking an end of SA mount. However, the company is developing an SA-to-L mount adaptor.

It features a Hyper Sonic Motor and updated algorithm to enable high-speed autofocus, water and oil-repellent coating on the front lens element, and a dust/splash proof structure.

Sigma 70-200mm f2.8 DG OS HSM Sports
Sigma is calling the 70-200mm f2.8 one of it’s most anticipated lenses. It’s the new flagship large-aperture telephoto zoom to meet the needs of professional photographers. A magnesium body is robust, yet lightweight (1805 grams) and dust/splash proof along with oil and water repellent coating on the front element. 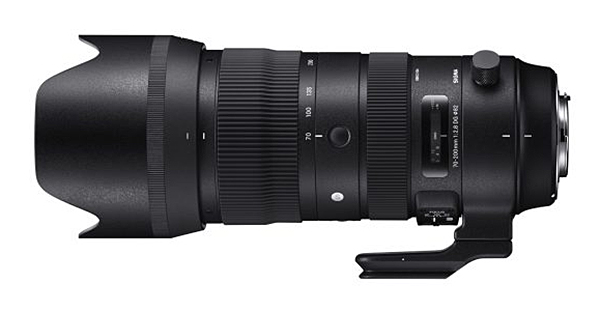 Optical design includes 24 elements in 22 groups, including 10 exclusive low-dispersion glass elements which allows for high res shooting from the centre to the corners. It has an 11-blade rounded iris diaphragm.

Sigma 60-600mm f4.5-6.3 DG OS HSM Sports
This is the world’s first 10x optical zoom telephoto lens with a tele end of 600mm. Incorporating 25 elements in 19 groups, consistent image quality can be achieved throughout the entire zoom range. This lens’ features the latest algorithm to deliver an image stabilisation effect of four stops. The optical design ensures correction of magnification chromatic aberration encountered in hyper-telephoto shooting. This offers both high res and edge-to-edge performance throughout the entire zoom range.

The lens will be available in Sony, Nikon, Canon, and Sigma mounts, shipping in late October with American pricing at US$1999.