Sigma Corporation has announced no less than nine new lenses from its premium Art range will be released for Sony full-frame (E-mount) cameras, including two all-new lenses which will also be available in Canon and Nikon mounts. 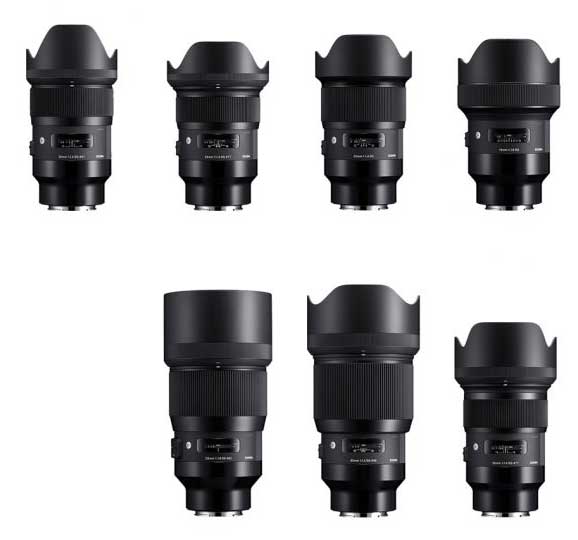 This is welcome news for both Sony E-mount camera fans and photo specialist retailers.  The Sigma Art lenses are gaining rave reviews around the world (for example, the 85mm f1.4 Art  is rated as the sharpest lens available at that focal length) and, if the existing pricing of Canon and Nikon-mount versions are any guide, will offer similar or better optical performance to Sony owners for under half the price of the Sony equivalents.

– Even Sony might be pleased to see these lenses announced, as a lack of (affordable) lens choice has been an argument against switching to Sony!

The new lenses will feature a new algorithm created to optimise AF and maximise data transmission speed. Sigma says that as result, the lenses will offer high-speed autofocus at the same performance level as that of a lens designed exclusively for mirrorless cameras.

In addition, these lenses will be compatible with Sony’s continuous AF (AF-C) and high-speed autofocus, which are not addressed by the Sigma MC-11 mount converter. Like the MC-11, the lenses will be compatible with in-camera image stabilization and in-camera lens aberration correction. This will include corrections for peripheral illumination, chromatic aberrations and also distortion.

Key Features
Sigma states that the lenses will deliver ‘subject-following’ performance used with cameras featuring Sony’s Fast Hybrid AF in AF-C mode and that autofocus will remain precise even in those E-mount cameras offering only contrast AF.

The lenses will respond to in-camera image stabilisation, optimising stabilisation depending on the focal length.

The lenses will be fully compatible with in-camera aberration correction, including corrections for peripheral illumination, chromatic aberrations and distortion.

The announcement doesn’t indicate when the new lenses will be available, and local distributor CR Kennedy has no local details to share  – so for Sigma to say they have actually been ‘launched’ is a bit of overreach.