It’s official – around one in three of the people who come into your store are inspecting a product for later purchase online, according to a survey from Finder.com.au, ‘Australia’s largest [shopping] comparison site.’ 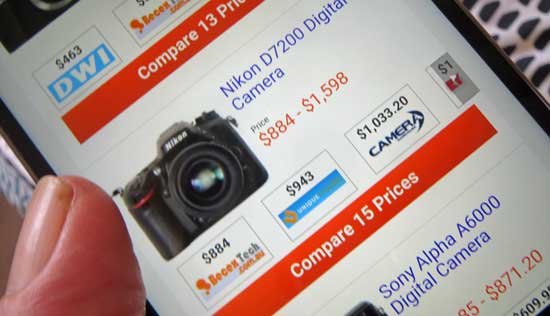 Thirty-one percent of Australians admit to deliberately checking out a product or trying on a garment in store only to look for it online for a cheaper price; otherwise known as ‘showrooming’.

A further 14 percent have never thought about it, but now they’ve been informed about showrooming by Finder.com.au, they think it’s a beaut idea.

Angus Kidman, editor-in-chief at finder.com.au, says savvy shoppers are happy to go the extra mile to get the best price.

‘Just 10 or 15 years ago Aussies were much more limited with where they could shop from. Unless you wanted to negotiate or walk from store to store to compare costs, prices were pretty final and the pool of retailers was more or less confined to our shores,’ he said.

‘Today you can be in a store, trying on a jacket and in the very same spot, you can Google it on your phone for a better price.

‘Retailers are well aware that some shoppers are wasting their time. In fact Amazon is working on something it calls Physical Store Online Shopping Control – a mechanism which blocks shoppers from visiting online rivals within a store.’

The survey of 2017 respondents shows 32 percent prefer to buy in store and rarely shop online, while 16 percent think showrooming is wrong as it’s unfair to bricks and mortar stores.

Only 7 percent confidently buy online without checking the product in a store beforehand. Millennials and Generation Z (aka younger people) are the most confident in shopping online without visiting a store first.

‘Walk into any store and you’re bound to see people taking pictures of items with their smartphones or scanning barcodes, just to make sure they find the exact same item online.

‘In this retail climate businesses might want to consider price-match guarantees or putting in competitive deals to keep consumers spending in their store.’ – Gee, thanks for the tip, Finder.com.au!