Ex-anteater leads to disqualification
Photo competitions are giving photographers a bad name! It seems every second international competition lately has been marred by a photographer pinching some other photographer’s work, or photojournalists setting up shots, or over-ambitious digital enhancement, or other scurrilous behaviour…

Now a category winner in the Wildlife Photographer of the Year competition has been found out using a stuffed anteater in his prize-winning Environment photograph. 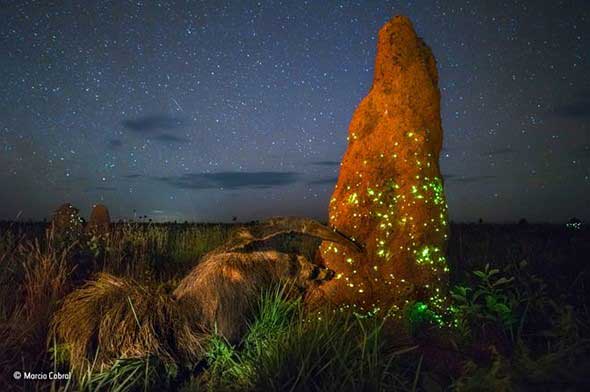 An anonymous tip-off – with accompanying photographic proof – informed the organisers that  Marcio Cabral’s anteater had a remarkably similar pose to the taxidermy specimen which holds court at the entrance to the park in which the picture was captured – Emas National Park in Brazil.

Five independent experts were called in and concluded that the subject of Cabral’s picture was indeed a former Anteater. English humourist David Mitchell writing in The Guardian suggested an alternative explanation, given the photographer is adamant that the subject had yet to shuffle off its mortal coil at the time the shutter was pressed: ‘Perhaps it was taking the piss out of its deceased colleague, adding insult to being-hollowed-out-then-filled-with-wire-and-wood-shavings. It’s possible, I suppose.’

– And click here for US comedian Conan OBrien’s take on the farce. 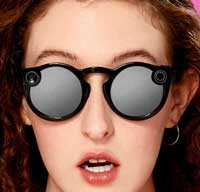 They are water resistant for shallow underwater snaps, and we optically challenged folk aren’t being left out of the fun – they will be available with prescription lenses.

Rumour has it that there were many thgousands of pairs of the original Spectacles left gathering dust in warehouses after the initial wave of ‘Is this the future of photography?’ stories drove a small spike in sales.

One definition of insanity is supposed to be repeating the same actions and expecting a different outcome, so the Snapchat folk must feel V2 is a sufficient improvement on V1 to make a difference.

Or they are insane. We shall see!

Spectacles retail at US$150. They come with a case which doubles as a charger.

Amazon expands
Amazon is opening a Sydney fulfilment centre, its second in Australia, to expedite delivery to customers across Australia.

The 43,000sqm warehouse in Moorebank, south-west Sydney, is scheduled to open in the second half of the year and joins the Dandenong facility in Melbourne’s east.

This follows the recent announcement of a ‘Fulfilment By Amazon’ service to its retailer clients.

DxO under Chapter 11 cloud
DxO Labs is apparently having a ‘nothing to see here, move on’ sort of Chapter 11 Bankruptcy Protection filing, as it restructures in a way that ‘will not effect our customers in any way’.

Its flagship DxO PhotoLab editing software is due for a free update in June and the DxO Mark camera and lens testing lab is a separate entity, unaffected by the restructuring. This must be of some regret to the marketers at Canon, given the brand doesn’t have one camera in the DxOMark Top 20, nor a lens in its Top 40. Canon would be delighted if DxO Mark just went away.

Return of the GIMP
…And speaking of editing software, GIMP, the open source and free alternative to 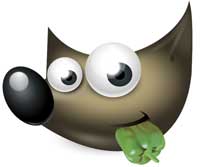 Photoshop, has been given a massive upgrade in GIMP 2, announced last month as the first all-new version in six years. It has an updated UI, new blend modes, layer groups with masks and a range of new transform tools.

If you need something a little more than Photoshop Elements but don’t want to pay  monthly rent to Adobe for the rest of your life, it could be worth looking at. https://www.gimp.org/

It would be surprising if the new camera was not full-frame 35mm format. Canon and Nikon have now both indicated they have new mirrorlress cameras in  the pipeline. In the meantime, Sony will be on its fourth or fifth generation of full-frame mirrorless cameras on the shelves by this time next year.

Sanity prevails in monkey selfie case
The social-justice-for-animals thugs at PETA have had their claim that an animal can hold copyright knocked out of the park after a three-judge panel with the Ninth Circuit Court of Appeals ruled that only humans can pursue copyright infringement claims.

In its ruling, the court said: ‘Affirming the district court’s dismissal of claims brought by a monkey, the panel held that the animal had constitutional standing but lacked statutory standing to claim copyright infringement of photographs known as the “MonkeySelfies”…’

The judges said the Copyright Act does not expressly authorise animals to file copyright infringement suits.

PETA claimed a macaque monkey who apparently goes by the name of Naruto, not  photographer, David Slater (who PETA has, by the way, financially ruined) owned the copyright because it took the image itself using Slater’s camera.

PETA attempted to have the matter put aside to avoid a legal precedent being established, leading the court to note:  ‘Courts must be particularly wary of abetting “strategic behavior” on the part of institutional litigants whose continuing interest in the development in the law may transcend their immediate interest in the outcome of a particular case.’

Slater is still required (due to a settlement with PETA)  to donate 25 percent of future revenue from the image to charities that protect crested macaques in Indonesia.

Smugmug acquires Flickr
Flickr has been acquired by photo hosting service SmugMug. According to USA Today, SmugMug CEO Don MacAskill is committed to re-invigorating the once market-leading service, and will maintain it separately from Smugmug.

Flickr was the most popular online digital photography services about 10 years ago. It was then acquired by Yahoo and under that management has gone very stale. While there have been desultory attempts to ‘make Flickr awesome again’ it never happened.

Then Verizon acquired Yahoo last year and off-loaded Flickr to a business which just might know what to do with it.