Respect Melbourne music photographer, Ros O’Gorman, has died after a short battle with cancer. She was 58. 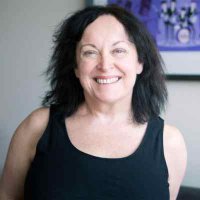 Ros (right) was an longstanding active member of the local music industry. She cemented her position in the stage barrier – the photographers’ pit – where she captured stars and up-and-coming musos in action.

Since the early ’90s, her photography skills brought her up close with artists spanning the entire musical spectrum. Whether it was opera, hip hop, punk, or classical, Ros was the there to document it all.

Her images were published in newspapers and magazines, print and online, but she primarily worked alongside her husband, writer Paul Cashmere. Together they founded online music publications, Undercover and since 2011, Noise11.

Ros’ photos with Paul’s writing were a powerful combination, and as a team they stood out as leading music media personalities.

Her passing was announced by Paul on Noise11.

‘My wife of 37 years has left the stage. For her, life was first three songs, no flash and then leave. She would like you all to know that this time she hasn’t stayed for the whole show,’ he wrote.

Similar to photography, the music industry has battled through challenges and it’s cut throat competitive. However, Ros has been remembered as both successful and with a warm personality.

The music industry has paid tributes to the photographer.

‘Ros O’Gorman was always the big smiling happy face in the photographers’ pit at all our shows for more years than I can remember, even when I was being grumpy at the photographers,’ tour promoter, Michael Chugg, said. ‘It was always a pleasure to run into her and Paul, whom upheld a long loving relationship in an industry, that burns most relationships. Ros was a shining light and inspiration to all the women making their mark on our industry. RIP Ros – gone far too soon.’

Musician Jimmy Barnes said:
‘Like myself, Paul loved music and was deeply involved in the industry through radio, but he found his true love when he met Ros,’ said musician, Jimmy Barnes said. ‘They spent a beautiful life working together and raising a family. I was so said to hear that she had been tragically taken from him. Although I know she will always be in his heart, it does not make the loss any easier. My thoughts are with him and his family at this difficult time.’