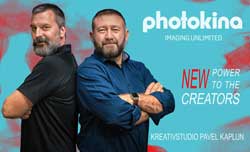 The organisers are continuing their expansion of the show to be a more hands-on, participatory event to attract enthusiasts and professionals, videographers, virtual reality fans and smartphone-ographers as well as the core audience of the photo trade.

Star of the educational/  will be a German photographer and educator, Pavel Kaplun who will head up a program called New Power to The Creators.

Pavel Kaplun and his team will set up a special area of sets for filming and photographing. Visitors can capture stills and video at individual stations and receive support from Pavel’s merry band of pros.

A comprehensive lecture program will also be part of the initiative.

‘Photokina focuses on the image. Depending upon the recording device or the processing software, of absolutely central importance for the origin of an image is who is looking through the lens or at a screen,’ said Christoph Menke, director of Photokina. (Maybe it lost some meaning in translation!) ‘In future we would like to emphasise this fact at Photokina even more intensively, and are pleased to be able to rely on the support of Pavel Kaplun and his team.’

‘It is important for us to support photo and video fans in developing a unique character for their art and in creating entirely personal works with the help of professional techniques and technologies. At the same time we offer them the chance to also make their perspectives accessible to others’, said Pavel Kaplun about the project.

A Photokina FB page, Photokina, New Power to the Creators has attracted over 700 members who are sharing their work. At the beginning of March, the first competition – for smartphone selfies and portraits – kicked off.