At last! With the announcement of its Z-mount full frame mirrorless system, Nikon injects some much needed competition into one of the most vibrant sections of the camera market. 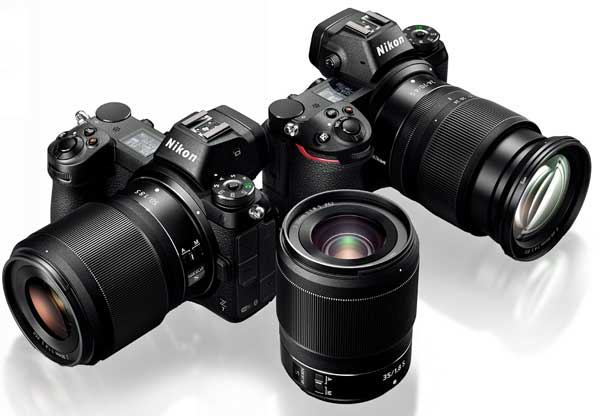 At the heart of the new Z mount system is the new, larger-diameter lens mount. It will include a range of high-performance lenses, including the fastest lens in Nikon history, with a super-wide f0.95 aperture. Additionally, the new ZFT mount adapter will enable compatibility with Nikkor F mount lenses, opening up the prospects of buying into the Z system for anyone with legacy Nikkor glass.

Z7, Z6 Product Overview
The Z7 and Z6 cameras (there’s actually a gap between the Z and the 6 and 7, but that’s a stupid bran ing affectation which should be ignored) are equipped with new backside illumination full-frame, Nikon FX-format CMOS sensors with built-in focal-plane phase-detection AF pixels, and the latest image-processing engine, Expeed 6.

The Z6 is an all-purpose FX-format camera with an effective pixel count of 24.5 megapixels (CMOS, backside illumination), which has an ISO range of  100–51,200.  It shoots full-frame 4K video with full pixel readout, and looks like the Nikon Z one would use for low-light, sports shooting and video.

Z7 and Z6 Primary Features:
– Backside illumination CMOS sensors, with built-in focal-plane phase-detection AF pixels, are common to the Z7 and the Z6;
– The Z7 has 493 focus points and the Z6 has 273 focus points, enabling coverage of approximately 90 percent of the imaging area both horizontally and vertically. This hybrid AF system uses an algorithm optimised for the FX-format sensor, to automatically switch between focal-plane phase-detection AF and contrast-detect AF with focusing;
– The Z7 and Z6 are equipped with the new Expeed 6 image-processing engine. Employing the superior resolving power of Nikkor Z and F mount lenses, subjects are rendered more sharply than ever before. Noise is also reduced. Additionally, a mid-range sharpening option has been added to Picture Control sharpness parameters. This option, along with existing sharpening and clarity parameters, allows users to make various textures within the screen sharper or softer, for both still images and movies. The cameras also offer 20 options of Creative Picture Control, supporting creative imaging expression. The effect level is adjustable from 0 to 100;
– Both cameras are equipped with an electronic viewfinder with a 3690k-dot OLED panel. The electronic viewfinder has, respectively, frame coverage and magnification of approximately 100 percent and 0.8x, as well as 37-degree diagonal viewing angle. It ensures a clear and comfortable view comparable to optical viewfinders, with reduced aberration and minimum eye strain, even during extended shoots. A fluorine coating that repels dirt has been applied to the eyepiece protection window. In addition, the  menu can be displayed in the electronic viewfinder, allowing users to quickly view and adjust a variety of shooting settings, including ISO sensitivity, AF-area mode, and Picture Control, all while looking through the viewfinder;
– The Z7 and Z6 bodies are compact, while boasting a firm grip that is easy to hold. Buttons such as the sub selector, AF-ON, ISO, and exposure compensation are all placed so that they can be operated swiftly and easily. Additionally, a display panel has been placed on the top part of the camera, where information about settings can be displayed.
– The Z7 and Z6 support recording video in full-frame 4K UHD (3840 × 2160)/30p movies using the FX-based movie format, but also full-HD/120p movies. Sharper UHD movies are made possible using the full-pixel readout. (The Z7 apparently shoots video at APS-C format.) Additionally, Active D-Lighting, electronic vibration reduction, and focus peaking can be used with 4K UHD and Full-HD movie recording. Nikon’s original N-Log can also be used with 10-bit HDMI output. The cameras utilise extensive colour depth and twelve-stop, 1300 percent dynamic range to record a wealth of tone information from highlights and shadows for more effective colour grading. Timecode support makes synchronising video and sound to footage recorded across multiple devices easier. Additionally, the control ring built into Nikkor Z lenses can be used to quietly and smoothly adjust settings such as aperture and exposure compensation;
– The Z7 and Z6 are equipped with in-camera vibration reduction (VR). The VR unit provides compensation for movement along five axes. The effects of vibration reduction are equivalent to a shutter speed increase of approximately 5 stops. This function can also be used effectively with Nikkor F lenses, including those not equipped with a VR function, with the Mount Adapter FTZ (sold separately). F-mount lenses will not have as high a level of vibration reduction.

The MB-N10 Multi-Power Battery Pack (currently in development) will hold two EN-EL15b rechargeable Li-ion batteries, effectively increasing the number of shots possible and/or movie recording time by approximately 1.8x. It will provide the same level of dust and drip resistance as the Z7 and Z6, and will support USB charging using the EH-7P charging AC adapter.

The Z7 and the Nikkor Z 24-70mm zoom lens will be available post-Photokm,ina, with the 50mm f1.8 prime lens available in late October and the Z6 following in November. Kit options will include Z camera with the FTZ mount adaptor for those with F-mount lenses.