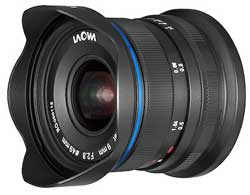 It’s the latest addition to the ‘Zero-D’ range – signifying ‘zero distortion’. These Laowa lenses from Venus Optics have a reputation for having a robust build, with a metal barrel. Venus Optics is a new lens maker from China which has been releasing an interesting (and affordable) range of ‘niche’ macro and ultra wide angle manual lenses over the past four years. The new 9mm Zero D has an RRP of $749.

It weighs just 215g and is 53mm long, and comprises 15 elements in 10 groups with two aspherical elements and three extra-low dispersion elements. The lens has a close focus distance of just 12cm. According to Laowa, this optical design successfully minimises both distortion and chromatic aberrations, while managing to also deliver good optical performance from corner to corner.

With a wide aperture and a focal length equal to 13mm with an APS-C sensor camera, it should appeal to astrophotographers, landscape photographers and for low-light photography.

Other features include a 7-blade aperture system, and maximum magnification of 1:7.5. Filter thread is 49mm for screw-in filters.