GoPro has added a budget-priced model to the range  – so inexpensive at $299  (US$199 in the US) that it doesn’t even get a numerical sub-brand. So it’s simply the Hero. 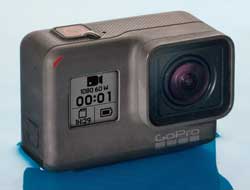 It’s being positioned as a device which ‘makes it easy to share experiences that would be difficult to capture with a phone.’

It has a 2-inch touchscreen and is waterprooof to 10 mwtres. Go Pro claims it is extremely durable, ‘making it the perfect GoPro for kids, adventurous social sharers and travelers.’

The GoPro Hero offloads your photos and videos to the GoPro app automatically, freeing the user from the crushing, soul-destroying tedium of handling SD cards and plugging the camera into a phone or computer. 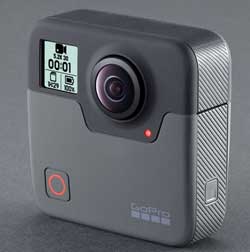 At the other end of the price and capability scale comes the $999.95 GoPro Fusion, which uses two slightly offset cameras to create what GoPro calls spherical video (360 degrees) at 5.2K resolution and stills at 18-megapixels (including raw files). It can be used for producing content for viewing in VR headsets at 3K resolution and 60 fps.

With ‘OverCapture’, you can extract a moveable 1080p or 720p section of 360-degree video to create a standard HD video. If you really wanted to.

It records 4-channel audio via multiple microphones. GoPro says playback of the surround sound offers an immersive sonic experience to go with the spherical video.

It requires two high-performance microSD cards (one for each camera) to record video.