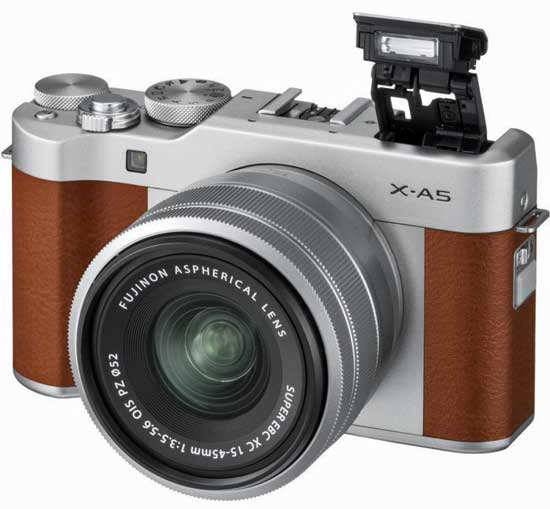 The X-A5 has the familiar Fujifilm X retro styling and has a 3-inch, 180-degree degree tilting touch screen LCD, Bluetooth technology for easy and quick image transfer and a claimed ‘up to’ 450 frames per battery charge.With the new lens it weighs in at just under 500g.

Fujifilm says the newly-developed image processing engine ‘offers a processing time 1.5 times faster than previous models’. In fact, it’s better ‘than previous models’ (ie, the X-A3) over a range of measures: ISO to 12,800; AF (twice as fast); camera shake and noise. (It’s good to see they’ve fixed all those problems 🙂

The X-A5 does not shoot ‘4K movies’ as Fujifilm claims. Fujifilm is being quite tricky here as if you read the press release carefully and to the very end, we find it shoots ‘4K video’ for five minutes max, and at a very unsatisfactory 15 frames per second. This is not 4K video. Retailers and buyers beware!

Fujifilm claims the XC15-45mm f/3.5-5.6 lens is the first ‘electric-powered zoom lens for X-Mount cameras’ (which makes one wonder what power source previous lenses were using). It can focus down to 5cm.

According to Fujfilm US, the X-A5 will be available from February 8 bundled with the new 15-45mm kits lens at a recommended US$600  – so maybe $850 – 900 here with GST. (Confirmed at $899.) It will be available in a choice of three colours of imitation leather.The new lens will be available separately from mid-March. US price is US$300.