The evolution of Epson from a manufacturer of point-of-sale receipt printers to today’s graphic imaging behemoth is a tale of persistence, innovation and smart decisions, writes Andy McCourt, publisher, Wideformatonline.com

While at Epson’s ‘Evolution through Innovation’ presentation at ritzy Otto restaurant, Sydney early in October, a lightbulb moment hit me when I saw the speed and image quality of the scans from the new FF 680W photo scanner. Photo scanners are not new, but this one scans a 300dpi image every second in batches of up to 36.

This means all those old shoeboxes and albums full of precious images that rarely see the light of day can be shared on social media, composed into photobooks, retouched and repaired, even enlarged as posters, because the FF 680W will also scan at 1200dpi (‘interpolated’, but 600dpi in native resolution).

The lightbulb moment was ‘This was all supposed to be Kodak’s market.’ The old: ‘you press the button, we do the rest’ slogan originated by George Eastman himself made Eastman Kodak the rulers of global photography for the best part of a century, for both the amateur and professional. How they let it all go is now called a ‘Kodak moment’ and taught in Harvard and other US universities as a lesson in how not to respond to change, how not to evolve into a higher intelligence that is top of the food chain. The irony is that Kodak invented the digital camera but the lure of maintaining massive profits from film and processing kept them focused on a last-century business model.

The standout lesson is that invention without effective execution is meaningless. This is where companies like Epson shine – they invent, they evolve but they don’t sit on their laurels and become complacent. They execute on the inventions on multi-levels, they take risks on new applications and then discover which one or two work best. Moreover, they listen to the market. Seiko Epson President Minoru Usui calls it ‘Sho Sho Sei’ which roughly translates as ‘the art and science of manufacturing.’

A simple device such as the FF 680W scanner (pictured right) can capture and restore images ready for wide format printing, say for posters and banners celebrating the lives of parents and grandparents, composite posters for anniversaries and of course photobooks. At around $695, it could act as an inexpensive ‘feeder’ to wide format printers, bringing new products and ideas to the imaging market. Product manager Paul Cunningham showed how even dog-eared, different sized and oriented photos can be loaded in and the software will sort them out. Torn photos can be protected by a carrier sheet and the tear retouched out in photo editing programs.

Epson also chose the ‘Evolution’ press gathering at Otto’s to feature the all-new the 24-inch SureColor T3160 and the 36-inch SureColor T5160 CAD/GIS/AEC, wireless printers that can also produce POS posters. Josh Crowle was on hand to demonstrate these models which we featured in their first showing at Visual Impact last month: https://www.youtube.com/watch?v=nKBq5zVr5eY. 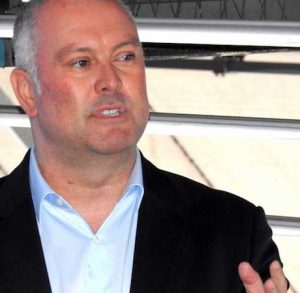 Epson’s general manager, Sales & Marketing, Craig Heckenberg (pictured left) revealed that Epson spends around $675 million a year on R&D, coming up with wearable Moverio computer-glasses, brighter, more powerful video data projectors, PrecisionCore piezo print lineheads – as well as evolutionary improvements to its printer range that now includes industrial-strength inkjet label presses and the iconic wide-format range, as well as the hugely successful ‘eco-tank’ A4/A3 printers for home and office use that defy the notion that inkjet ink needs to be more expensive than Krug champagne – you simply refill from bottles or pouches.

At the end of these evolutionary proceedings, Craig and his co-presenter and Consumer Division counterpart, Bruce Bealby, drew the door prize of an Epson eco-tank printer which was won by Christopher Holder of AV publisher Alchemedia, Geelong. He had already left for the airport so will have his new printer couriered to him – ah well; sometimes evolution waits for no man.

One thing for sure is that Epson’s evolution has a long way to go yet and it will be a fascinating ride.
– Andy McCourt, publisher, Wide Format Online (www.wideformatonline.com)