Big players in good shape for 2018

If the health of the photo industry can be measured by the success of its larger players, the impressive financial results of Canon and Fujifilm are reason for optimism.

And if we also include Nikon’s third quarter financials (released just yesterday), in which both revenue and profit forecasts have both been revised upwards for the full year, the trend to profitable performance seems to augur well for 2018.

Canon reported a 61 percent growth in group net profit to 241.9 billion yen ($2.8 billion) for the Jan-Dec 2017 year. Digital cameras were a star performer, according to chairman and CEO Fujio Mitarai.

Canon
Below is the Canon commentary on its Imaging Systems business which accompanied  the annual financial report, presented by Canon CFO Toshizo Tanaka on January 30:

Within the Imaging System Business Unit, while the pace of decline in demand for interchangeable-lens digital cameras is gradually decelerating, the sales of the advanced-amateur-models —including the EOS 6D Mark II—enjoyed solid demand, allowing Canon to maintain the top share, mainly in the United States, Europe, and Japan.

As for compact-system cameras, the advanced-amateur-model EOS M6 and the
entry-level EOS M100 enjoyed strong demand. As for digital compact cameras, amid the shrinking market, unit sales remained at the same level as the previous year, supported by the increased sales of such high-value-added models as the newly launched G9 X Mark II…

2018 outlook
Interchangeable lens cameras: Demand is expected to decrease moderately. Projections for digital compact cameras indicate continued market contraction, centered mainly on low-priced models, despite solid demand for high-value-added models. With regard to inkjet printers, demand is expected to continue to exceed that of the previous year.

In 2017, the market for interchangeable-lens cameras shrank by 1 percent to 11.4 million units. This rather small decrease reflects, among others, the market’s recovery from the supply shortage caused by an earthquake in 2016. We, on the other hand, posted a sales decline of 3 percent to 5.51 million units, which was in line with our plan. Although our sales decreased at a faster rate than the market, this was expected as our sales were at a high level in 2016 because the earthquake did not affect us.

Canon took steps to stimulate demand through new products, launching six models in 2017, the most in the industry. All of these new products were well received by the market, receiving high markets (sic) for their enhanced network connectivity and AF capabilities for which there is strong user demand.

Among these, we grew sales of the 6D Mark II – a model that features a full-size sensor in a body that is relatively compact and light and offers improvements in basic functions, which contributed to the shift to hi-amateurs. Launching such new products enables us to limit the decline in selling prices and as a result, we improved sales and profitability compared with last year.

As for 2018, given that the market in 2017 was at a high level due to the earthquake, we expect the market to shrink by 4 percent to 11 million units. Within this market, however, we expect our unit sales to be 5.5 million units, which is in line with last year.

The new products launched in 2017 that were just highlighted will contribute to sales for a full-year. With this and continued efforts to enhance our lineup we will stimulate demand and work to further increase our market share. Within this, for mirrorless cameras where we are working to enhance our lineup, this year we continue our aim to grow at a double-digit rate, putting focus on expanding sales of mainly new products that captures SNS user demand.

From a profit perspective, we will work to improve our product mix by raising the proportion of new product sales. Additionally, to reduce costs, we will promote automation and in-house production as well as accelerate sales of mirrorless cameras thereby benefiting from lower cost of sales through volume effect.

Printers: The market in 2017 grew thanks to the recovery in Asia, and in 2018, we expect a slight increase. In 2017, in addition to growing sales of large-volume ink models in emerging markets, we also posted solid sales of models that make use of a compact platform. As a result, we achieved unit sales growth.

In 2018, the new products that we launched in the second half of last year will contribute to sales for the full year. On top of this, we will continue efforts to significantly expand sales of large-volume ink models by totally renewing our lineup, and introducing new products that offer improvements in color reproduction and user-friendliness. This will work to accelerate sales and realize growth that exceeds the overall market.

Fujfilm Holdings
While Fujiifilm results to December 31 only represent three-quarters of its current financial year, sales and particularly profits are up, with the Imaging Solutions business one of the strongest performers.

Fujifilm’s photo business improved consolidated revenue by 15.6 percent to almost 300 billion yen ($3.5 billion) due to the sales increases in the ‘electric imaging field of the optical device and electronic imaging business’. (We think they might mean digital  cameras.) Consolidated operating income was up 76.1 percent (to almost $600 million).

Below is the supporting commentary from Fujifilm:
In the photo imaging business, overall sales increased due to favourable sales, especially in instant photo systems which enable users to enjoy on-the-spot printing of photos, such as the Instax series and instax films in the year-end shopping season. The Instax Share SP-3 smartphone printer, launched in November 2017, adopted the square format, popular for use in SNS (social networking, we believe). It advocates a new way of photo printing to boost printing demand among smartphone users.

In the high-value-added printing businesses, sales expanded thanks to continued business growth from various services, including Wall Decor services that enhance the fun of decorating and displaying photographs by adding panels to the photographs and framing, the new Coyomi service for creating desktop calendars with favorite photographs, and the
Year Album service that uses AI-based proprietary technology to automatically arrange the layout of a photo album. (None of which seem to have found their way to Australia or New Zealand yet.)

In the electronic imaging field of the optical device and electronic imaging business, overall sales increased due to strong sales of Fujifilm X-E3…X Series [cameras] such as X-T20,  X100F, which were launched in February 2017, GFX 50S…and interchangeable lenses.

In the optical device field, overall sales increased, reflecting the strong sales of various industrial use lenses such as lenses for and vehicle camera and projector, and MK lenses
series were also launched as a new series of cinema camera lenses designed for recording video…Fujifilm has 8 4K broadcast camera lens products and is seeking to lead the field. 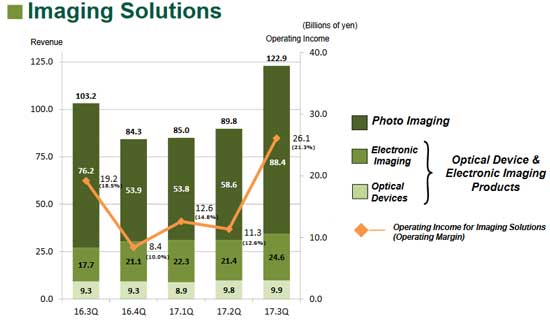 Nikon
Nikon also seems to have puled itself out of a trough of financial despondency, given the grim state of the business just 12 months ago.

While revenue fell in the current financial year (ending March, 2018) ‘due to a decrease in unit sales of interchangeable lens type and compact digital cameras’ operating profit increased significantly ‘as a result of the favorable response to the D850, a digital SLR camera launched in September 2017, which optimizes the combination of high resolution and high-speed performance.’
A doubling of profit on slightly declining sales supports the radical change of direction – dropping the DL series, the voluntary redundancy program, etc – imposed by Nikon management in  2017. 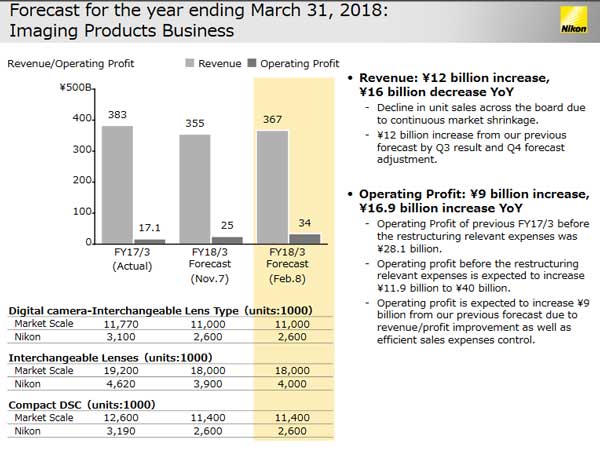