While it has largely gone unnoticed in the antipodes, June 21 was National Selfie Day in the US. (And this is not actually Fake News. Well, not in the conventional sense, anyway.) 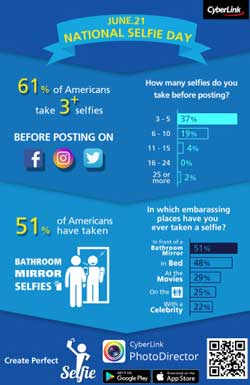 To give National Selfie Day (established in 2014) the attention and reverence it deserves, photo editing  ‘app’ specialist Cyberlink commissioned market research ‘to celebrate the image of oneself through the cultural phenomenon that is the selfie.’

According to the new research via polling agency YouGov, 62 percent of US adults and two-thirds of millennials claim to take at least three selfies, at times even more than 25, before deciding which one they want to share with others. Amazing, hey?

The authors of the report then make a bold but evidence-based observation: ‘…Across the board the data is clear – few individuals make the initial decision that the first selfie they take is the one they decide to publish and share with others.’ On average most take between three to five.

But although the selfie:share ratio is profoundly illuminating, the real aim of the research was much more ambitious: ‘The larger question is where, and with whom, are people claiming to take these selfies?’  – And this is where things get even more interesting: ‘When looking at mainstream Americans who take selfies,’ stated Cyberlink, ‘Nearly one in five (18 percent) have been lucky enough to take a selfie with a celebrity. Another 46 percent have taken selfies in the bathroom mirror, 38 percent while still in bed, and a surprising 16 percent of Americans have taken a selfie on the toilet.

‘All that’s very well’, you might say, ‘but what about the all-important millennial demographic. Surely millennials would be far too cool to take pictures of themselves sitting on the toilet?’

Cyberlink is glad you asked that question. ‘Looking further into the specific practices of US millennials who take selfies, the results are slightly different, yet just as illuminating. (Our italics) Twenty-two percent claim to have taken a selfie with a celebrity, more than half (51 percent) have taken one in the bathroom mirror, 48 percent have taken a selfie while still in bed, and a staggering quarter of millennials who take selfies claim to have done so on the toilet. Staggering indeed.

When looking at more exotic and culturally sensitive locations, 20 percent have taken a selfie at the hospital, 11 percent at the site of a memorial and 9 percent at a cemetery or graveyard.

– But what does it all mean? Can some enlightened company spokesperson put these staggering revelations into some context. How are we – millennials and adults alike – to make sense of all this mind-boggling data? And what’s with the toilet selfies?

‘Without a question, selfies are the modern self-portrait and has (sic) entered nearly every aspect of pop culture imaginable. It’s a spontaneous celebration of who we are, and National Selfie Day this year is simple a reminder of that,’ said someone very high up at Cyberlink. ‘The research is clear that by looking at the number of selfies people take prior to sharing, there is a certain care that goes into the craft of capturing the perfect photo.’

Oh, and he added: ‘CyberLink, alongside our sister company Perfect Corp, have the best portfolio of photography and selfie-centric apps, respectively PhotoDirector and YouCam, to fulfil any selfie aficionado’s toolkit.’

-And we made hardly any of this up:  http://www.businesswire.com/news/home/20170621005556/en/Honoring-National-Selfie-Day-CyberLink-Debuts-New