After six months of futile lease negotiations, health food retailer SumoSalad has taken the drastic step of placing some of its stores into voluntary liquidation to avoid punishing exit fees from Scentre Group (Westfield). 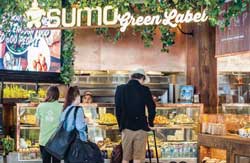 The dispute began when Scentre began cramming more and more food outlets into its malls – going from 34 to 93 in a three-year period in one Westfield, according to SumoSalad chief executive, Luke Baylis.

Baylis wanted to either renegotiate leases at 12 outlets located in Westfield malls or walk away from them without a financial penalty.

‘Sumo has been working with landlords over the past few months to negotiate more realistic food court leases for our stores, with no success,’ said Baylis. ‘Regrettably, landlords have opened the door to more and more food businesses in recent times, as well as opening whole new eating areas within the same precinct, which has essentially cannibalised existing tenants.

‘This is an untenable and unfair demand on small business owners, which would send our franchisees in those shopping centres broke.

As noted by retailing consultant Peter Ryan in reference to SumoSalad: ‘If a landlord increases category competition by 300 per cent through expansion and lifts rents by 15 per cent in a market that is only growing at 2.5 per cent and with margins that are declining at 10 per cent, the numbers just don’t add up.’

Scentre increased new rents to existing tenants by 4 percent in the last 12 months while dropping rents by 3.8 percent to attract new tenants.

SumoSalad was paying up to $4000 per square metre at Westfield outlets, according to a report in the Financial Review.

SumoSalad has a total of 104 stores and overall trades profitably with over $80 million in annual sales. Given the flooding of malls with food outlets, SumoSalad is opening outlets in hospitals, airports, service stations and universities.

While SumoSalad is unusual in that it is using voluntary administration as a tactical move, there has been a rash of other voluntary liquidations among retailers which have hit shopping centres over the past 12 months or so.

Scentre Group chief executive Peter Allen said that his company was closely monitoring the rash of new voluntary administrations among retailers. It has been avoiding exposure to specialty fashion chains that have struggled because of slack consumer demand.

COMMENT: The arrival of Amazon may have an unusual indirect effect on specialty retailers such as camera stores. From a competitive point of view it’s surely the big box retailers and discounters who will lose most sales to Amazon among the ‘never pay retail’ bargain-hunting segment of consumers. But if things get tough, those same big box retailers won’t be forced to the drastic measures adopted by SumoSalad to re-negotiate leases. They will have the market power to force lease costs down if they start to get hammered by Amazon. The retail landlords will then look to smaller tenants to make up the difference. In this way, the competitive pressure Amazon puts on larger discount retailers will be partially transferred from larger retailers and shopping centre managers to small retailers.

This could in turn have an impact on shopping strip leases as small retailers located in malls flee the price gouging.