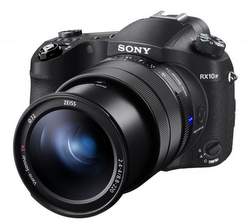 The RX10 has the same Bionz x processor featured in the a9, allowing the camera to shoot at 24 fps, and the latest Exmor RS CMOS sensor, which work together to maximise speed and deliver a quality image.

It features has a Fast Hybrid AF system, which provides 315 phase-detection points covering 65 percent of the image sensor, allowing the camera to lock focus in as little as .03 seconds. Sony says this AF system has previously only been available in α series cameras.

Other AF improvements include an enhanced version of the popular Eye AF, Touch Focus and Focus Range Limiter.

The camera can shoot 4K video at 25p, and with the new AF system Sony says the RX10 can focus two times faster than the predecessor.

The 24-600mm f2.4-4 Zeiss Vario Sonnar T lens is the same model that featured on the RX10 III, and spans from a wide-angle through to ultra-telephoto.