A new, sub-$100 smartphone instant printer from Japanese toymaker Tomy might prove to be a popular stocking-stuffer this Christmas as it connects the ubiquitous cameraphone to the instant photography trend. 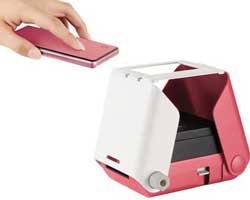 The Tomy Printoss, which attracted a lot of interest at the International Tokyo Toy Show in June, enables users to print colour images straight from the smartphone without any need for apps, connections or even batteries.

Here’s how it works: The Printoss is loaded with Fuji Instax Mini instant film; the smartphone screen featuring a digital image is placed on the Printoss framing template; the printer shutter button is pressed; a manual handle is turned to push the instant film from the Printoss; after 30 seconds or so the image appears, a la Polaroid.

As the printer works manually, there’s no battery required. It weighs just 350g and is available in blue, black or pink. The price works out to around $90 (ex GST).