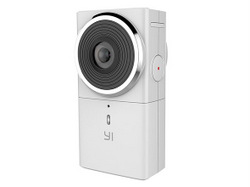 Meanwhile GoPro, which is being out-specced by the Chinese manufacturer’s comparatively cheaper action cams, unveiled a pilot program for its own 5.2K VR spherical camera, GoPro Fusion. However its arrival is pegged for the end of 2017.

The pocket-sized Yi 360 VR records 5K at 30 frames per second, can perform 4K in-device stitching, and when connected to Wi-Fi it can stream 2.5K video direct to Facebook, YouTube or sync to a phone.

‘Virtual reality is exciting. It promises a whole new range of opportunities for creating and sharing truly immersive experiences,’ said Sean Da, CEO of Yi Technology. ‘For VR to truly take off it has to be easy and fun. At Yi Technology, we challenge ourselves to bring the most innovative technologies together in a way that is simple, enjoyable and useful for anyone, from kids to professionals.’

It can record for over one hour on a battery charge, and can be controlled from a smart phone app.

As for GoPro, its announcement only indicated that the product is being tested – possibly to persuade potential Yi customers to hold off buying a 360-degree VR camera until the end of the year.

GoPro hasn’t had it easy lately. Its attempt to enter the drone market failed with the compact Karma, which was overshadowed by DJI’s all-round better Mavic. The Karma was then recalled due to mechanical faults.

Fujifilm US unveil GFX Pro Support
From May Fujifilm will offer American professional photographers who own a GFX-50S medium format system a dedicated professional support program. 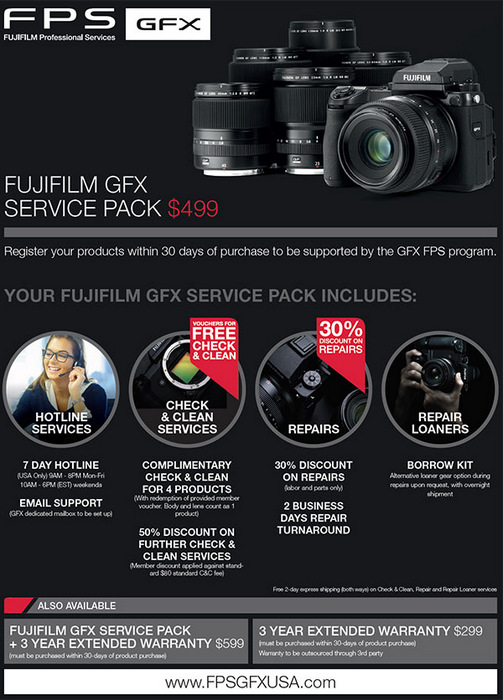 GFX Fujifilm Professional Services (GFX FPS) is exclusive to owners of the new medium format system, and will cost US$499. This is over twice what Canon, Nikon and Sony ask for membership of their pro support groups.

The photographer must own the camera system and one GF lens to be eligible, and sign up within 30 days of buying the camera.

While Fujifilm X-series cameras show the brand’s interest in the pro market, they remain geared towards the prosumer. But the GFX system made Fujifilm’s commitment to high-end professional photographers concrete.

Fujifilm has begun to roll out the professional support program first in Europe and now in the US.

It’s unclear when Fujifilm Australia will announce a local pro support program, and what this program will look like. PhotoCounter asked but didn’t receive a response in time. 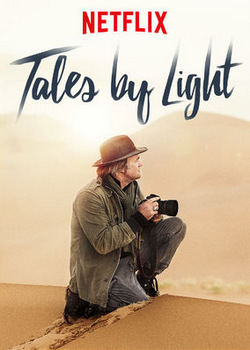 Canon TV series on Netflix
Canon Australia has announced that season 2 of the locally-produced Tales By Light photography adventure series is available globally on Netflix.

Each of the three episodes in the series, directed by Abraham Joffe, follows photographers’ ‘journeys’ (yew) as they pursue a personal project. The series features photographers Jonathan and Angela Scott, Eric Cheng, and Stephen Dupont.

Prior to streaming on Netflix, Tales By Light first aired on the National Geographic Channel in Australia and New Zealand.

Canon’s press release highlights how it has shifted its marketed approach from ‘the traditional focus’ on products and features (and hey, supporting industry events), to in-house content creation. It might be an idea to shift back pretty pronto if it wants to maintain its market share lead!

Canon boss Jason McLean is now tagged as ‘Executive Producer’ of the Tales by Light series – which while being a distraction from his day job no doubt looks good on the ol’ CV!