The results from Photo Review Australia’s annual readers survey have just been released to PhotoCounter, with cameras, lenses memory – and photo books – topping the list of products readers intend to buy.

The Photo Review survey is one of the few pieces of research available to local photo retailers. It has been running since 2003, and now represents a sound longitudinal survey of Australian photographic consumers. It’s based on an annual survey of Photo Review magazine and website subscribers, and with over 400 respondents this year, representing a valid sample of the predominantly interchangeable lens-owning enthusiast readership. (59 percent ‘mid-level’, 26 percent ‘advanced’, 20 percent ‘pro or semi-pro’.)

The good news for photo specialist is that 92 percent plan to buy an Interchangeable Lens Camera (ILC) in the next two years, with 40 percent opting for a DSLR (the same as 2016), 33 percent looking at a ‘compact ILC’ (mirrorless) and another 19 percent not yet decided between the two options. 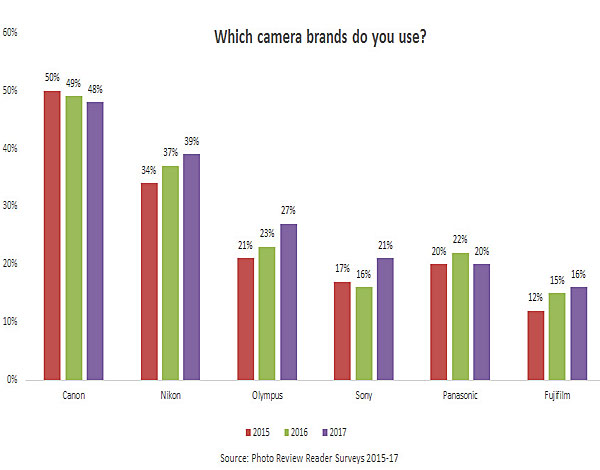 Following close behind cameras in plan to purchase is storage/memory product, with 88 percent planning a purchase in the next two years. This is a segment into which many photo retailers could look to expand. There’s precious little help in making purchase decisions on storage/memory from the mass merchants, and its a complex area.

‘The biggest change this year is the growth in planned purchase of accessories and post-capture equipment and services,’ said Photo Review publisher, David O’Sullivan. ‘On the other hand “Brand “Ambassadors” are rating quite low in terms of importance for buying advice.’ 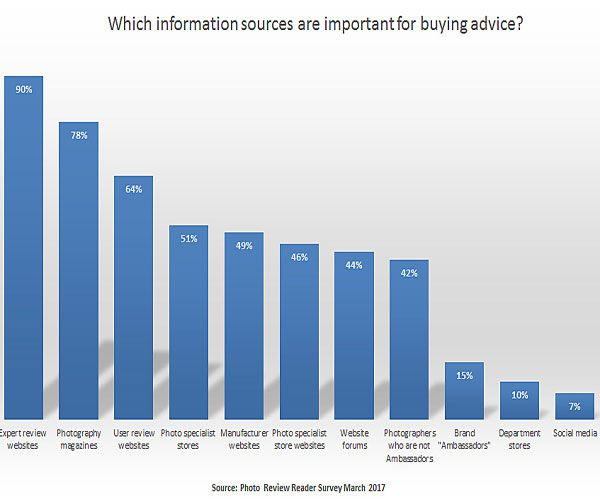 Camera companies might indeed reflect on whether the marketing dollars they are sinking into ‘brand ambassadorships’ are returning on the investment. Only 14 percent see photographic brand ambassadors as important sources for buying advice. Photographers whose endorsement hasn’t been bought are more valued, with 44 percent of respondents seeing ‘Non-Ambassador’ photographers as important for buying advice.

The top source of advice is expert review sites, with 90 percent of respondents nominating them. But 46 percent said they were wary of review websites owned and run by retailers.

(Note: With Amazon apparently about to set up shop here, it would be wise to avoid recommending DPReview for its camera reviews – DPReview is owned by Amazon and links all its reviews to the Amazon camera retailing site. There are good Australian camera review sites – such as Photoreview.com.au – which are part of the local ecosystem and review in local conditions for Australian photographers.)

Other sought-after sources for buying advice include photography magazines (77 percent) and photo specialist stores (51 percent – slightly down from 56 percent the previous year). Compounding the importance of photo magazines and websites, 91 percent of respondents said they give photography advice to family/friends/colleagues.

Social media, another medium into which some major players in the market seem to be sinking a squillion, is almost irrelevant, with just 7 percent – less than department stores at 10 percent – looking for advice on Facebook and the like.

The elimination of the offshore-online GST loophole from July 1 should dampen the appeal of international retailers.