Local Tamron distributor Blonde Robot has announced the $1999 Tamron SP 24–70mm f/2.8 Di VC USD G2 (model A032) for full-frame DSLR cameras. It will be available in Nikon mount in early August with the Canon model due early September. 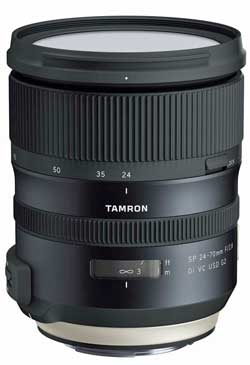 The lens uses new dual MPUs (micro processing units) to provide rapid autofocusing with improved accuracy and a claimed ‘highest vibration compensation performance of any lens in its class’.

It also includes a protective, water-and oil-repellent fluorine coating for smudge resistance, moisture-resistant construction and a locking lens hood that prevents detachment due to unintentional contact during use.

An electromagnetic diaphragm system, a standard feature for Canon-mount lenses, is now employed in Nikon-mount lenses. More precise diaphragm and aperture control is claimed due to diaphragm blades being driven by a built-in motor through electronic pulse signals.

Another feature is a 9-bladed circular diaphragm that helps produce creative bokeh. The lens also has a minimum object distance of 15 inches.

It is compatible with the optional Tamron TAP-in Console. This accessory provides a USB connection to a computer, so users can update the lens firmware. Using the console, they can also customize features, including fine adjustments to the AF and VC.