The sorry saga of Electronic Bazaar has hopefully reached its final chapter with the jailing of owner Dhruv Chopra after he failed to comply with court orders made against him in May 2015. 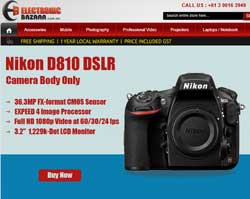 Consumer complaints about Electronic Bazaar stretch back to 2009.

Chopra was found to have contravened the Australian Consumer Law by making false or misleading representations about the availability of refunds and the extent of Electronic Bazaar’s liability for faulty goods.

The court declared that, since at least May 21, 2014, Chopra had made false or misleading representations about refunds and his company’s liability for faulty goods.

The Court ordered Mr Chopra to serve one month of a three-month sentence immediately, with the remainder suspended on condition that for a period of five years he stop:
– making false or misleading representations online about consumers’ refund and warranty rights;
– wrongly accepting payment for goods by failing to supply those goods within the specified time;
– being knowingly involved in such conduct by any other person.

In a story we wrote back in 2014 we asserted that Electronic Bazaar also had dubious GST collection practices: ‘It claimed on its FAQ page, we wrote, that ‘all our prices include GST and if shipped from overseas include all duty and taxes. However, it only offers a tax invoice on request.’

Electronic Bazaar pricing at the time was undercutting legitimate local retailers by 20 percent or more, and it had a massive range of lenses and cameras for sale.

On May 11, 2015 the Court found Mr Chopra contravened the Australian Consumer Law by making false or misleading representations about the availability of refunds and the extent of Electronic Bazaar’s liability for faulty goods.

At that time the Court ordered Mr Chopra pay $100,000 in penalties and imposed injunctions preventing him from making any similar false or misleading representations for a period of five years.

The ACCC filed proceedings for contempt on November 3, 2016 alleging Mr Chopra, through his involvement in another online electronics store www.dreamkart.com.au, breached these orders through representations he made on the Dream Kart website.

On April 19, 2017 the Court found Mr Chopra guilty of the contempt charges brought by the ACCC.

‘The ACCC regularly seeks court orders to prevent the same detrimental conduct from happening again and to protect consumers from future harm. The ACCC rigorously pursues compliance with these court orders by taking contempt action where we consider there has been a breach,’ ACCC Commissioner Sarah Court said.

‘The Court’s decision to imprison Mr Chopra reinforces the serious consequences for those who do not comply with court orders.’

In his judgment Justice O’Callaghan said, ‘I have no doubt that the contempts [Mr Chopra] committed… are criminal in nature. They involved an attitude of defiance, a deliberate and contumacious determination to defy the Court and a direct intention to disobey the Court’s order.’