Inkjet versus silver: horses for courses

John Swainston recently caught up with Ron Kubara, worldwide spokesperson for Noritsu, the company that pioneered minilabs and is now following a similar path with retail inkjet printers.

PhotoCounter: Noritsu’s heritage is firmly in silver-halide based processing. You have lined up a defiantly non-silver halide product family for 2017. Does this mark a break with the past?

Ron Kubara: Noritsu has a breadth of product, be assured, we are not forgetting our roots. We have our QSS-3801 HD lab (pictured right), delivering 640dpi silver halide product, with a much smaller footprint than in the past, still capable of outputting 420 prints/hr for 10×8, right up to 12×36 inch print (30x 91cm). Indeed its big sister (The QSS-3704G series) can do over 2100 regular prints per hour. Silver halide is still the lowest cost delivery means for quality print and many areas of the world it’s still a very important part of the mix. So silver halide has never gone away, and in some niche areas we are even seeing a resurgence.

PC: How should one look at the investment and cost for print today?
RK: I’d say a 25 percent lower cost for silver halide is a good number to use. But, it depends on YOUR volume. Many people look at chemistry and paper and compare that to paper and ink. It’s a broader discussion. You can’t forget the amount of heat energy of some printers, typically incurring air conditioning costs of some $3000 a year in your electrical bill. So if you have high volume, that cost gets amortised widely, but there is a crossover point where ink and paper becomes lower cost for some operators because of these added factors that really are critical to each individual investment decision.

PC: What about the quality issues?
RK: Silver halide is continuous tone and produces much smoother gradations for skin tones; but if we are looking at detail, then inkjet can reproduce that sharper and more cleanly. For faces that’s not always an advantage. So, in Noritsu’s platform using inkjet, we have an emulator for skin tones. That’s particularly important on images sourced from smartphones, which perform poorly in low light. Noritsu calls this algorithm ‘Super Grain Suppression’. Most printers can produce a really nice print from a real good file. The acid test is what sort of print can be achieved from average or poor quality files – with noise, colour hue shifts, under-exposed, ultra-high-compression jpeg and the like.

PC: So in the real world what are the issues for retailers to look at in printer purchase?
RK: Of course initial capital cost, then running cost related to your volume, and of course reliability. Many markets worldwide are moving to inkjet due to the lower capital cost once they learn that most general consumer captures look better on inkjet than on AgX. Labs with high volumes and/or a focus on portraiture prefer an AgX print and its lower media costs.

PC: Thermal dye sublimation appears to have a huge installed base in retail chains providing local print output, despite its significant cost disadvantage per square metre and life issues in high temperature environments. Does this vary much around the world?
RK: In Asia dye-sub really is not accepted simply because of cost, but in part for reasons of life and material stability in high temp-high humidity environments. In Australia, by contrast, dye sublimation has been a popular retail offering until recently.

PC: From various international data, it seems the market has bottomed and slightly improved for some operators. Does Noritsu see this too?
RK: Actually we really don’t know the square metres of media now used for photo printing due to the combination of AgX, inkjet, dye sublimation and toner printing. The only thing we sort of have is an idea of 6×4 print – that remains down and trending further down. However by contrast, enlargement and art prints are way up. Poster printing is way up; duplex printing is way up. And print in photobook continues to grow. So you have to decide what part of the growth areas you’ll make your mark in.

PC: You mentioned duplex print, by which I assume you mean printing on both sides of the paper. What sort of products does that enable a retailer to offer?

RK: Noritsu now offers a lay-flat binder for calendars without the standard spiral bind system in a simple unit that sells for under $2000 (Noritsu SPB-1 binder, pictured right). And of course a lay-flat double-sided photobook is the other major output. Given that we can hook this up to user-created content in store, or, if you wish online, the flexibility is obvious and attractive. The ability to do a 30x30cm in-house book, typically in volumes of 5 or 6 a day, should be highly appealing and profitable.

PC: Dry output is now common throughout your range of products?
RK: Inkjet technology has enabled us to make print from digital sources entirely free from chemicals. Four-colour dye inks enable a large colour gamut similar to Adobe RGB, a broad tonal range and a much more eco-friendly process.

PC: What about print materials? Are we going to see anything dramatically new there?
RK: We think our new pearlescent paper offers a point of difference and enhances the user experience on viewing and receiving these pictures. It certainly gives a premium look and feel and is a durable and exciting way to present special pictures. It closely matches the luminescence the user sees on their later model mobile devices.

PC: So what’s next in print?
RK: We think there’s a lot of improvement yet possible in the consumer interface involved in getting pictures from a phone or camera to print. Our customers ask us why we have offered various components – printer, binder, software, but some elements such as kiosks we have had to partner outside, with consequential integration issues. We have started working with software developers outside of Japan and in addition to full kiosk offerings we are showing early steps in the use of Android and Apple iOS-platform products for phone and tablet input. We call it the Smart Picture Creation platform; the main focus is that it is user-friendly and intuitive. With a fairly flexible back-end, ease of use in the interface is no mean feat. Our software interface expert, Luke Stutters, has ensured that no matter what device you choose to work with – tablet, computer, kiosk, the interface is pleasingly similar. So look out for more news on this later in 2017. 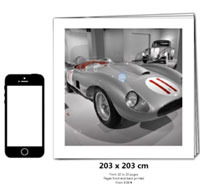 On screen, we give people an idea of the relative size or scale of their prints by showing an iPhone to scale beside the print size they selected. We offer them the unusual (but of course highly popular, thanks to Instagram.) square format for print. And by the way, we will take the small resolution of that Instagram square image and produce, through advanced algorithms, a very attractive high quality 8×8-inch (20x20cm) print.

PC: In a world where 360-degree viewing and experience is growing in popularity, can print still survive?
RK: Even with OLED and many other new means of viewing, ultimately you have to leave the digital world. A reflective-surface print is analogous to nature – we relate to it better and we can touch it and share it, a fundamental human behaviour. Now a stitched 360 panorama can be printed and viewed and retained as permanent, whether created by a specialised device, or simply in your phone camera. It’s an exciting new direction.

The smaller QSS Smart DR08 and DR12 printers were shown at Photokina 2016 and are the first Noritsu printers utilizing user-replaceable low cost thermal head technology and inks. The response to QSS Smart both during and after Photokina has been overwhelmingly supportive for Noritsu to continue with development of the series. We will be demonstrating the DR12 at the Photo & Electronics Imaging Fair in Beijing, April 21-24.

Double-sided printing continues to increase in consumer demand for photobooks, cards, calendars and other products, and at Photokina we also showed the concept printer DS14. This future member of the QSS Smart family will print double sided sheets up to 14-inch as well as handling 12-inch roll printing.
© Copyright John Swainston, 2017