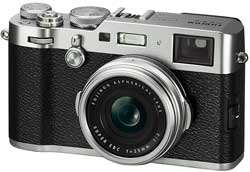 The body also sports a physical ISO dial (ISO ‘expandable’ up to 51,200) which is incorporated within the shutter speed dial, and the exposure compensation dial can now be set to a C position for an increased +/- 5 stop range of adjustment.

On the rear of the camera is a focus lever for faster focus point selection. The majority of the physical controls, buttons, and dials have been moved to the right-hand side for easier one-handed use.

The X100F has Film Simulation modes to mimic the look and feel of some of Fujifilm’s film types such as Provia and Velvia (which, ironically, Fujifilm is ceasing to manufacture from March this year.)

Other features:
– three-stop neutral density filter for working in bright light conditions;
– shutter speeds up to 1/32,000 sec;
– macro focusing on subjects as close as 10cm.

The X100F is expected to be available in Australia in late February 2017 for an RRP of $1999. It will be offered in all-black and black and silver versions. 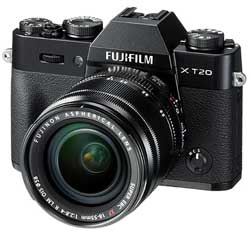 The X-T20 is the successor to the X-T10, with updated sensor and processor, along with an improved AF algorithm to boost the camera’s startup time and AF performance, and 4K video.

The X-T20 has a 3-inch tilting touchscreen LCD monitor for multi-angle shooting. It has a resolution of 1,040,000 dots, and there’es also a 2,360K-dot OLED EVF with 100 percent frame coverage and a magnification of 0.62x. A video setting has been added to the Drive Dial to enable instantaneous switching from still photo shooting to movie capture.

It delivers 5 fps live-view shooting, a quick start-up time of 0.4sec, a shutter time lag of 0.05sec and shooting interval of 0.25sec. There is a pop-up flash positioned in the center of the top plate.

The X-T20 can also record both Full HD and 4K (3840 x 2160) video, the latter with a high bitrate of 100Mbps. Video shooters can take advantage of the X Series’ Film Simulation effects. Recorded video can be output to an external monitor via the HDMI port. The camera also accepts input audio from an external microphone.

The X-T20 is due for release at the end of February with the XF18-55mm lens for an RRP of $1799. The camera will be offered in all-black and black and silver versions.