Fujifilm has announced a new outdoors digital compact, the FinePix XP120,  with a 16-megapixel CMOS sensor and a 3-inch LCD monitor. 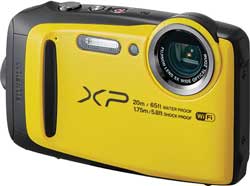 The FinePix XP120 is waterproof down to around 20 metres, shockproof to withstand a fall of around 1.7 metres, freezeproof to under 10 degrees Celsius and dustproof.

The Fujinon 5x optical zoom lens has a 28mm wide-angle setting and the camera has built-in optical stablisation. The 3-inch, 920K-dot LCD monitor has an anti-reflective coating.

The XP120 features an improved grip design for one-handed holding and a double-locking mechanism for the battery compartment.

Creative features include a ‘cinemagraph’ feature that produces still images with moving elements, as in the latest iPhones.

Additional features include: burst mode at up to 10 fps; Full HD video recording at 60 fps with a wind filter; time-lapse recording, a motion panorama 360-degree function; 11 artistic filters (7 for video); underwater and underwater macro functions; and interval timer shooting that can be set at various intervals from 15 seconds to 10 minutes.

A remote shooting function allows for wireless connection from the XP120 to a smartphone or tablet. It will be released in the US in February with four colour options at a US recommended price of US$229.95 – which should see a local RRP at or under $400 with GST.

The new X-Pro2 graphite edition with Fujinon XF23mm f/2 R WR lens and a lens hood kit, will be available in the US from late January at a US price of US$2299.95.

The X-T2 graphite silver edition will also be released in the US in late January, with a US recommended price of US$1799.95.