Canon sales down, losses at $34 mil

The largest business in the Australian photographic industry, Canon Australia Pty Ltd, achieved total revenue of $679 million for Jan-Dec 2016, down $47 million on 2015 revenues.

It made a loss of $34 million before income tax and had a ‘tax benefit’ of just under $8 million, resulting in a ‘total comprehensive loss’ of $26 million.

Over the past six years (2011-2016), Canon Australia has made sales of over $4 billion, with total profits after tax of a meagre $19 million. During this period, it has paid no net tax, but instead enjoyed tax benefits from the ATO of over $20 million. That is, if it wasn’t for tax benefits, it would have lost money on sales of $4 billion.

Cost of sales – predominantly the landed cost of products it imports from Canon Inc Japan, was $446 million, down from $451 million in 2015.

The figures reported above relate to Canon Australia Pty Ltd, the business with which the photographic industry trades.

The financial report prepared by Ernst & Young (which also looks after the financial accounts of notorious tax avoiders Google, Apple and Facebook) showed the growing contribution made by the other businesses which comprise the Canon group: Sun Studios; Canon Finance; Canon NZ; Lamberts Business Systems; Oce and Oce Finance; Harbour IT and Converga. Total revenue for the consolidated group of companies went from $786 million  in 2015 to $859 million in 2016.

The Canon Store and photographic print services providor Photo Pico are part of Canon Australia rather than the consolidated group. 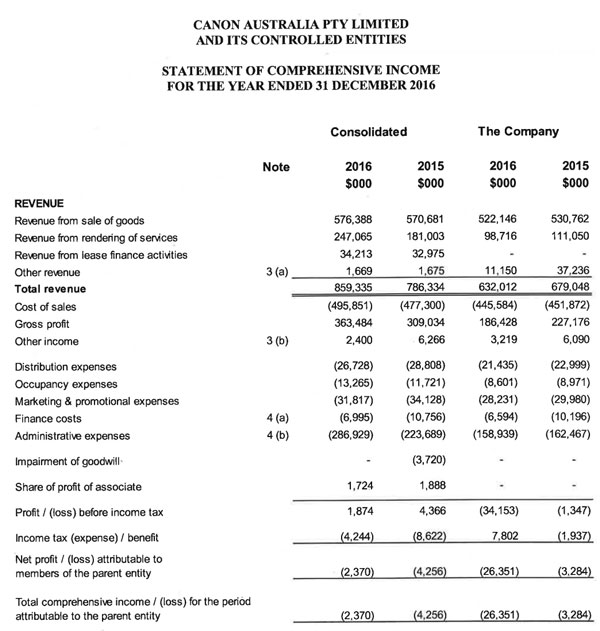